Campaigners in Sheffield are worried that licences for fracking could be granted in South Yorkshire overruling local councils.

Simon Bowens from Friends of the Earth said he feared fracking companies would press ahead with plans for drilling following news that the government had overruled Lancashire County Council’s decision to reject a fracking application.

Bowens was speaking at a panel talk held by the student union of the University of Sheffield on 12th October and said that fracking has negative environmental impacts including the high level of methane emissions and long-term carbon emissions. He questioned the central government responses towards climate change, “what is the decision we are heading to?”

In a telephone interview with Dr Matthew Cotton, a Lecturer in Human Geography Environment department at the University of York, said fracking is a very local issue as it affects local environment and landscape. But, he said the Central government had decided to put fracking as a national infrastructure project and by seizing the decision making power from the local councils is totally undemocratic.

“The Central government who do not have access on the fracking site make the decision, but the impact of the site such as environmental degradation of the area is suffered by the local people who do not have a say.” He adds.

Francis Egan, CEO of Cuadrilla ,the fracking company in the Lancashire site, said in the press release last year, “The massive potential for the natural gas to be extracted in these areas could help to drive the Northern Powerhouse by securing the low carbon energy future of the UK as well as creating investment and local jobs across the region.”

Asad Rehman, campaigner for Friends of the Earth said in the panel talk that people want clean jobs and green jobs, but not dirty jobs. The oil companies earn 27.6 trillion dollars in revenue, but refuse to fund alternative energy.

Also speaking at the meeting was Tim Thornton, a GP from Ryedale who said fracking has a negative health impact on people, especially children. The operation of fracking will emit Benzene which leads to Leukemia and blood disorder. The energy site will also emit Hydrofluoric fluoride which will damage people’s skin and lung tissue when people inhale it.

The following video shows how GP Tim Thornton talked about the health concerns on children brought by fracking during the panel talk on 12th October: 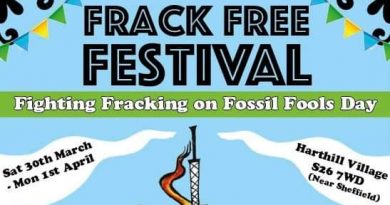