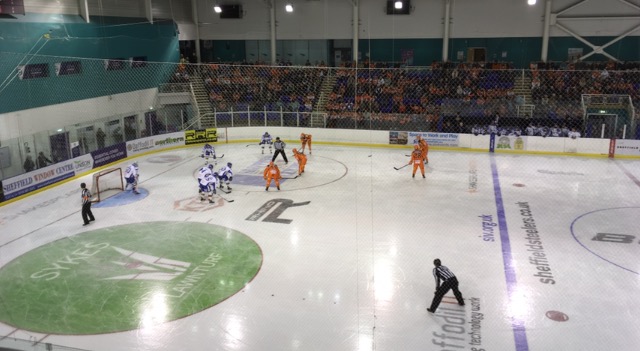 Sheffield Steelers’ Geoff Walker had a game to remember as he debuted against Fife Flyers at Ice Sheffield.

Third placed Steelers came into the game looking to pick up ground on the top two of Cardiff and Belfast, whereas fifth placed Fife looked to stop the rot that has seen them pick up only three points from their last ten games.

After a period of scrappy play, the Steelers started to show their quality, forcing a number of fantastic saves from distance from Fife netminder Shane Owen, namely from Ferrara, Dowd and debutant Walker.

Fife did look dangerous on the break however, and nearly broke through but for some savvy defensive play from Nilsson.

Fife finally caved to the pressure with 6 second left to go in the first period when the puck broke to Valdix, who lashed a fierce shot past Owen into the top left hand corner to break the deadlock.

The second period started low on quality much like the first, with Fife’s Schaber receiving a penalty for tripping, but the first chance arrived for Fife. Down to five, a complacent error from Walker allowed a clear chance, but he was saved by goaltender Mustukovs.

Fitzgerald then received a tripping penalty for the Steelers to reduce them to five for a period of time, but Fife were unable to capitalise.

Steelers’ second finally came after Fitzgerald’s return from the box, with Nelson capping a fine move after 26:54.

Fitzgerald once again found himself on the sidelines after his second tripping penalty of the game, but yet again Fife were unable to breach a stout Steelers defence, going into the third period 2-0 up.

Fife’s resistance eventually collapsed early in the third period as a three-minute blitz yielded four goals to all but seal the game.

Geoff Walker managed to pounce on a parry from Owen to open his account in Sheffield, before goals from captain Jonathan Phillips, Colton Fretter and John Armstrong put the Steelers in a commanding 6-0 lead.

Flyers did manage to grab a consolation through Thinel, but it was a thoroughly convincing performance from the Steelers to close the gap on first placed Cardiff to six points.

Man of the match was named as Yared Hagos, who had a solid game at Center.