Winning Walker excited to be in Sheffield 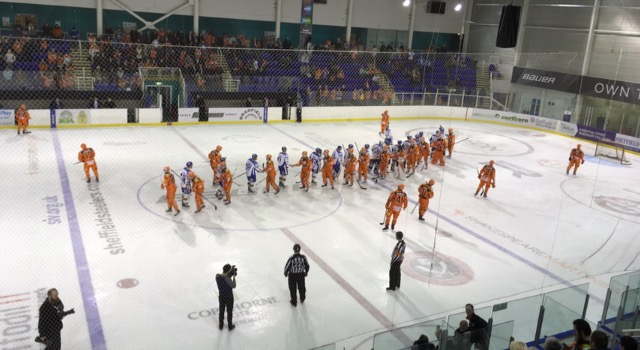 Canadian right wing Geoff Walker was thrust straight into the side for his debut game against Fife Flyers last night.

His debut for the Sheffield Steelers went well, as he scored the third in a 6-1 win with a finish from close range, before then combining with Guillaume Desbiens to provide an assist for John Armstrong.

Speaking about his debut, Walker was pleased with his contribution.

“As an offensive player, you want to show right away the type of player you are and to get those points was huge for me personally.”

It was Walker’s first experience of Elite Ice Hockey League hockey, and he was glad to get off to a good start.

“I enjoyed (the game), and winning like that in a great performance from everyone makes the debut easier to enjoy.”

Walker was top scorer for his former side Fassa, who play in the Sky Alps Hockey League, and says he is enjoying the change of scenery.

He said: “I came from a small city in Italy, so it’s nice to be able to walk around downtown. My teammates have all been great in helping me to settle in, so I’m really liking Sheffield so far.”

The Steelers are six points behind league leaders Cardiff and have trips to Nottingham and Edinburgh at the weekend. Walker wants to be involved in a winning team not only in the short term, but in the long term as well.

He said: “I’d like to stay here for a while, I want to win here and that’s why I chose to come here.”

As well as being in the hunt for the league title, the Steelers are also still in contention in the Challenge Cup, and will be hoping to win their first Cup since 2003.