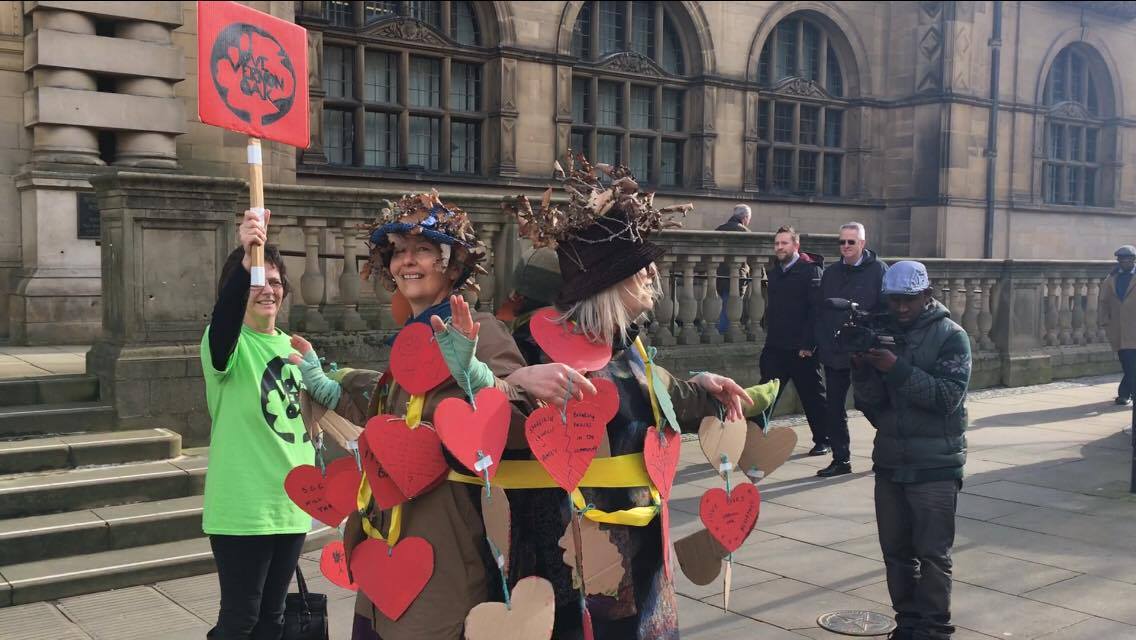 Residents have gathered outside Sheffield’s town hall dressed as the 150-year-old Vernon Oak tree in protest of the council’s controversial felling scheme.

The 150-year-old oak tree that is loved by the community could still live for many more years if it is not cut down as it is in the prime of its life.

Sheffield has over four million trees, many of which are along the roads of residential areas.

Facebook groups have been created to encourage members of the society to spread the message about saving Sheffield Trees.

According to ‘Save Sheffield Trees’ Sheffield City Council’s much needed ‘Streets Ahead’ campaign is renovating the roads, but their policy towards the trees is extremely harsh – many mature trees are being felled for the slightest of reasons. On roads such as the ‘iconic’ Rustlings Road, along Endcliffe Park, residents are being served notice of fellings without meaningful consultation.

Amy Angove, 42, a protestor outside the town hall said: “I think we need to ensure that Sheffield trees are protected. Trees are a beautiful source of nature and to just cut them down will be a shame”.

She also adds “We have to take a stand against this, and I am quite pleased that as a community we are doing something about it”.

The tree felling scheme started since 2012 and has been heavily rejected by members of the public.

Many campaigns have been set up to protect tree felling and one example is the Sheffield Tree Action Groups (STAG) that operates to save Sheffield’s mature trees.

They exist to encourage Sheffield City council to have a legal authorization on all tree planting and felling operations that do not include works to trees that represent.

A protestor dressed as the 150-year-old Vernon Oak tree said “We are doing this because we want to protect our trees. Vernon Oak tree is healthy and it is still going but Sheffield City Council decides that it needs to be felled so we are just waiting for an answer now”.