Sheffield Steelers are still focused on winning the Elite League post-season championship despite losing to Cardiff Devils, according to summer signing John Armstrong.

The Sheffield side lost 6-2 to the Devils on Saturday, handing Cardiff their first regular season championship title in over 20 years.

However, Steelers’ sights are now firmly set on their next game against Nottingham Panthers tomorrow night in a 3rd versus 4th clash.

Steelers, who were back to back championship winners, still have the chance to enter the Continental Cup and play in Europe if they win the Play Off final which will be held in Nottingham on the 9th of April.

The Steelers are experienced in Europe, having faced teams from Sweden and Austria back in August.

The Sheffield side are rumoured to be in talks with European opposition in order to organise a pre-season match up but the Steelers have not revealed any details as of yet.

Steelers will play away to Nottingham Panthers tomorrow at 7:30 PM which will be their last away game of the season.

Never seen a more undeserved, dirty win from any team. Enjoy the titles lads, ours next season #SheffieldSteelers #CardiffDevils

Paul Day, another fan on twitter, expressed his excitement ahead of the play offs. He said:

A bad and pointless Sheffield Steelers game tonight. Both of next weekend’s games are pointless for us as well. Can’t wait for the playoffs.

When speaking to Shef News, Armstrong said that there were many improvements to be made following the team’s performance against the South Wales side.

To watch the full interview with John Armstrong, click the video link below.

Steelers ready to push on after Challenge Cup success 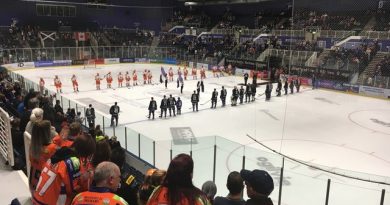