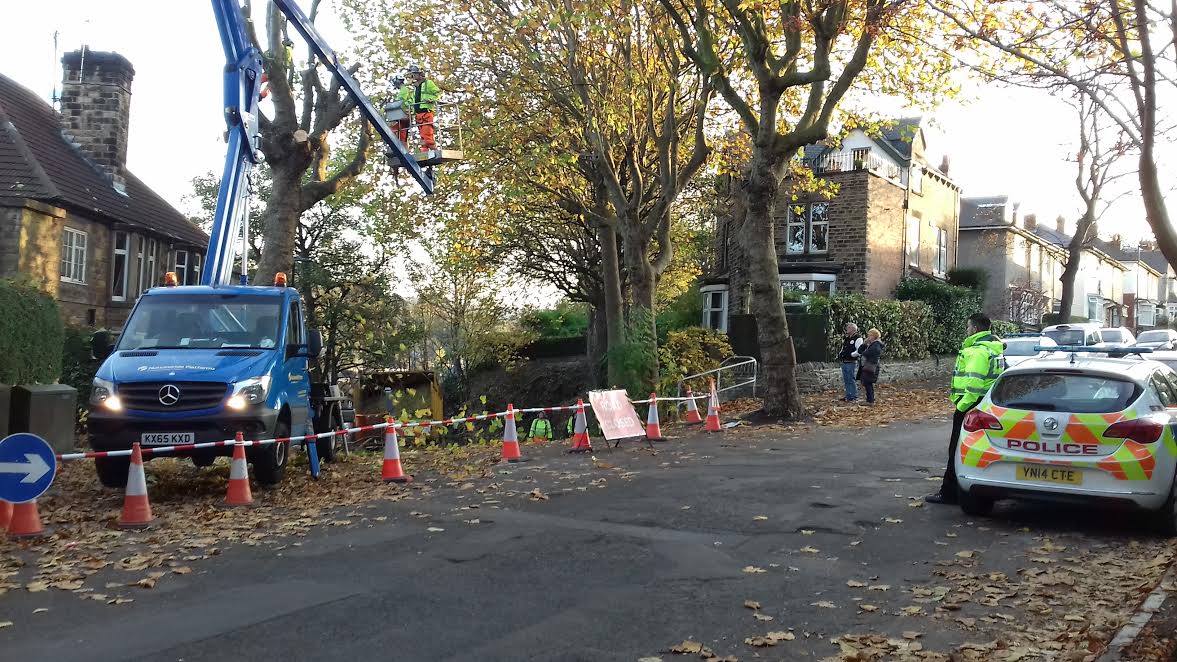 Tree campaigners are to take legal action against South Yorkshire Police after potentially being wrongfully arrested.

In recent months, 14 campaigners have been arrested for preventing contractors from going about their business, only to be found not guilty.

In response, the group have now decided to take action against the police, with barristers suggesting they may have acted unlawfully in their handling of the peaceful protests.

Alison Teal, the Green Party councillor for Netheredge and Sharrow who was arrested in February, said: “When you’ve reached a point where the Council and the Police think it’s acceptable to arrest and detain peaceful caring members of the same community they’re intended to serve and protect, you know there’s something wrong with the management of our city.”

Her partner, Dr Simon Crump, lecturer at the University of Huddersfield, was arrested last November whilst protesting a felling on Marden Road with fellow tree campaigner Calvin Payne.

The pair were served by policeman Mr Stubbs with an order under Section 241 of the Trade Union and Labour Relations Act 1992, and after multiple requests to move, the campaigners were arrested.

They were then sent to Shepcote Lane and detained there for eight hours as there was no code in the police computer for such an offence.

Dr Crump said: “Basically we were locked up because they couldn’t find out what it was that we had done”.

After being released, the pair were served with charges yet later found not guilty.

Last week, Dr Alan Billings, the police and crime commissioner for South Yorkshire police, had said campaigners would no longer be arrested in the course of these protests.

Dr Crump expressed concerns and also said: “I am certain that this whole thing isn’t over. I think this is an impasse, it’s a bit of a stalemate.”

The arrested protesters have released a statement regarding the legal action, expressing their wishes to “challenge the legality of their arrests, charges, and time spent in detention and on bail”.

I contacted the South Yorkshire Police for comment, but I had not heard back from them by time of posting.