Better provision of cycling to get more people on the bike 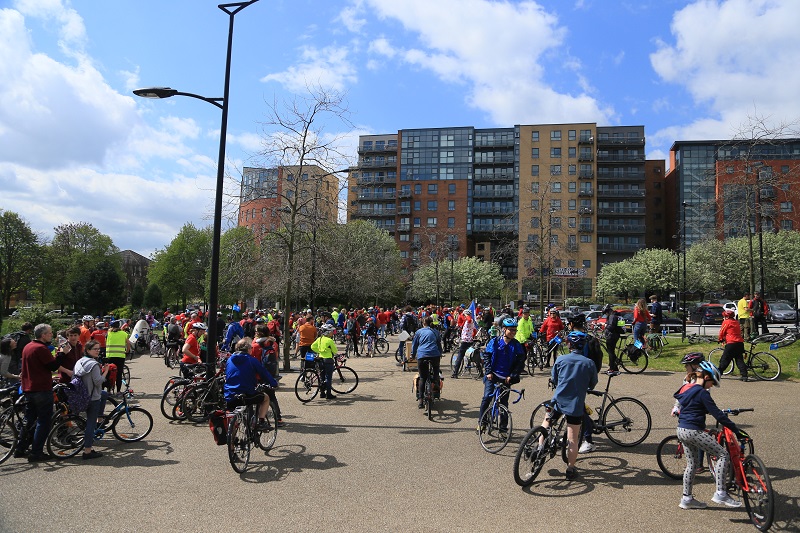 Cyclists are lobbying for more cycle routes separating from the main traffic roads and tram tracks.

Members of Cycle Sheffield have campaigned for cycle routes on Sheffield’s main roads to separate cyclists from motorists.

They are asking for councillors to build cycle paths in Ecclesall Road, Chesterfield Road, Penistone Road and London Road which connect to the city centre.

Ian Carney, chair of Cycle Sheffield said, “We will get to see good political leadership from the local council, also from local businesses to say hey we want to see cycling as part of the transport and let’s make it happen.”

As part of the national cycling campaign, coordinated by Cycling UK, the local group organised a Big Ride event on Saturday to promote more safe cycle spaces. More than 320 cyclists have taken part in the ride.

The South Yorkshire Transport Committee sets to increase the mode share of cycling to 10% by 2025. New cycle routes are being built under the plan, including Portobello – Trippet Lane – Barkers Pool way and Charter Square.

But cyclists are still concern about the safety of cycling along the  tram tracks.

Owain Hayman, 26, a student at the University of Sheffield got his back wheel stuck and bent in the tram track when he was crossing the road on West Street. He flew over the handle, cutting his hands and knees.

Owain Hayman, a victim of the tram track accident

Another victim, Charlotte Coleman, 47, who cycles to Hallam University for work every day broke her teeth and damaged her jaw when her wheel got stuck in the tram track.

“I think Sheffield tries to be cycle friendly but fails through lack of real consideration as to how cyclists use the roads and move around the city,” she said.

Dexter Johnson, 34, from Walkley, said we cannot meet the target if the council do not improve the provision of cycling.

“There is no signs and directions to take your ways. If you don’t know where you are going, you might come along and find your ways on tram tracks,” he said.

Alex, who has been repairing bicycles for five years at Bike Rehab in Sheffield City Centre, said most of the road in Sheffield is safe for cyclists. But, it is the best to avoid the tram route.

He said: “It is usually best just to think about the journey and plan out a little bit more before you head out.”

A video about the Sheffield Big Ride: