Rare & Racy : Another independent store is closing in Sheffield 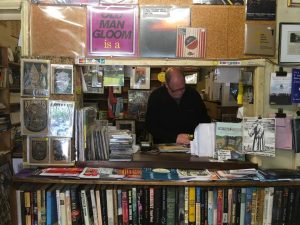 Despite the massive amount of support received from locals, another independent store on Devonshire Street, Sheffield’s independent quarter, is now coming to an end.

Allen Capes, the owner of Rare & Racy is managing to sell all its goods before the shop has to move out from the site.

Two years ago, Sheffield City Council agreed plans to demolish the row of shops to built new shops and student flats above.

However, a petition to save the stores reached over 20,000 signatures.

Wendy Miller, 54,  has supported the shop and signed the original petition told ShefNews:

“The news is shocking. There are much more developments could be done in this city without ruining this lovely thoroughfare that we see here. All those people that signed the petition are still going to do it. Where is the democracy? It disappears.

“Developing something like this that have already existed that looks lovely, that is part of Sheffield, is part of our history, is just not correct. Independent shops are what people outside of Sheffield want to come to see.”

Jason Alston, 45, thinks it is a very commercial based decision.

“I have lived in Sheffield since 1995. I have been buying from this shop for 20 plus years. I think it’s a real shame, I don’t think it needs to happen. I don’t think we need any more generic shops that are already taken over the old buildings of Sheffield.

Rare & Racy is not the first shop being forced to move out. The bed shop which was located next to the book shop has moved out recently. Syd & Mallory’s Emporium, an independent store sales homemade items located in Devonshire Street, has been affected as well.

Lucy Newell, owner of Syd and Mallory’s Emporium: “It was going to happen to us. We were one of the shops affected by it but we moved so it’s okay. Rare & Racy is an institution in Sheffield, I feel we should have won the petition. The independent quarter is getting less and less independent now, the whole thing used to be independent. Taco Bell, Subway, all those used to be independent and slowly it’s getting more and more cooperate in it. I don’t think it’s good for this city.”