Death Cafes in Sheffield open up to break taboos 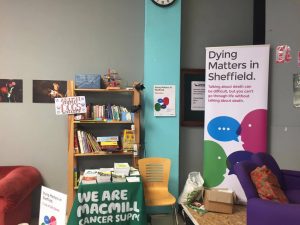 A project to get people talking freely about death was launched in Sheffield today.

Dying Matters Awareness Week, a national campaign, opened a death café at the Theatre Delicatessen this morning, in a bid to get rid of  the taboos surrounding death.

Sheffield people were encouraged to come along, drink coffee and discuss dying, grief and supporting others in times of bereavement.

Mike Reeder, from St. Luke’s Hospice, said: “There are two things in life we cannot get away from – taxes and death, and we don’t like talking about either of them.

“Discussing death in a way that will help people be open is the goal.”

Today’s stalls included a circle of life game, a memory box making station, and a wall of wishes activity as part of the project led by the National Council for Palliative Care, set up in 2009.

The events – free of charge – are taking place throughout the city this week, and aim to raise awareness about death as a natural part of life.

Penny Merrett, who works at St. Luke’s Hospice, said: “The idea behind the death cafes is for people to come along, have a drink and a piece of cake and talk freely about death in a safe public space.”

Part of the programme was a five-woman production of Sheffield’s theatre company Dead Earnest called A Space for Sharing and dealt with women’s real life experiences of living with breast cancer who seek advice and support online.

Ian Eady, from the Sheffield Teaching Hospitals, who is part of the organisation team said: “We want to get rid of the taboo around death. Get people talking about it because death itself entails so much.”

For the full programme and event details visit: https://www.stlukeshospice.org.uk/dyingmatters

Watch a clip of the production: