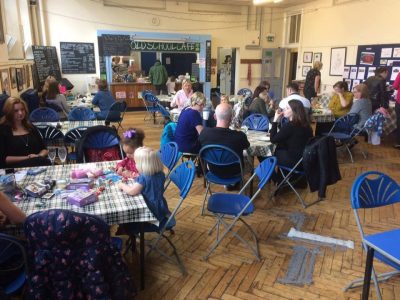 A Sharrow woman, who has battled a silent disease for 12 years, held a fundraiser with a twist in a bid to raise awareness for her condition.

Christie Mather, 24, has suffered from endometriosis since her teens, a long-term condition where tissue that normally grows inside the uterus are found elsewhere in the body.

Ms Mather co-organised a silent auction, in which people wrote their bids next to the item they wanted, which she said was fitting due to the nature of the disease.

She said: “I think the auction was a real success and I am already beginning plans for holding a similar event next year.”

The auction was held on Saturday at Old Sharrow Junior School and raised £600 to Endometriosis UK.

Some of the prizes on offer included a comedy club ticket donated by The Leadmill,  Sheffield United FC match tickets, a two course meal and a cocktail masterclass at The Botanist.

Mrs Mather has suffered with heavy periods since she was twelve, but first experienced chronic pain after the birth of her daughter in 2012.

She had to quit her job as a barmaid at the Nailmakers Arms after being diagnosed in 2013, because the 8 hour shifts left her worn out and suffering with depression.

Ms Mather, said: “I have been given a lot of conflicting information from medical professionals and no real answers.”

“It is a constant battle to be heard by doctors and consultants in regards to endometriosis, it takes many women years to achieve a diagnosis as initial concerns are very easily brushed off. I still feel let down by the healthcare system and am constantly battling with GP’s for further treatment.”

Ms Mather, said: “I was very lucky to stumble across the group, through them I have found answers to many of my questions and being able to talk to women with similar struggles to myself has been the most effective coping mechanism.”

“Without the group I would not have achieved any of this and I would be in a very dark place right now. There is a lot to be done in awareness for this disease and mainly educating people on the impact it can have on sufferers’ lives.”

Mrs Mather is now back in work, but can still experience flair ups on her left hand side after physical activity.