Environment-Saving Artwork up for Auction Tomorrow 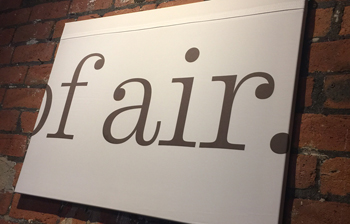 One of the 12 pieces up for auction tomorrow

The world’s first air-cleansing poem “In Praise of Air” was created in 2014 as a result of a collaboration between Professor of Chemistry Tony Ryan and Poet, Simon Armitage at the University of Sheffield.

The printing of the poem has been divided and canvassed into 12 individual artworks that are being sold at a charity event tomorrow night, at 99 Mary Street in the city centre.

All the proceeds from the auction are being donated to The British Lung Foundation which has invested a total £26m into lung disease related research over the last 30 years, aiming to help the approximate 12.7 million people in the UK that suffer from lung-related illnesses.

The 10m x 20m installation has hung on the side of the University’s Alfred Denny Building for three years.

Upon its installation next to the A57, Professor Ryan had said it would eliminate emissions from around 20 cars every day.

As of 2017, it had removed around two tonnes of nitrogen oxide from the surrounding environment, a toxic gas found in vehicle emissions that is responsible for environmental damage, such as smog and acid rain as well as an array of lung-related health issues.

However, in response to the project, ex-Green Party leader and candidate for the Sheffield Central constituency Natalie Bennett seemed less optimistic. She said: “I think it’s worth using these things to highlight the issue but I think to deal with the overall problem these are always going to be spot treatments that aren’t going to affect the overall level of air pollution.”

“As a method of highlighting the issue and a way of getting people talking about it, that’s great, but what we actually have to do is reduce the amount of nitrogen oxide in the atmosphere.”