Pollution-removing poem to go under the hammer in Sheffield 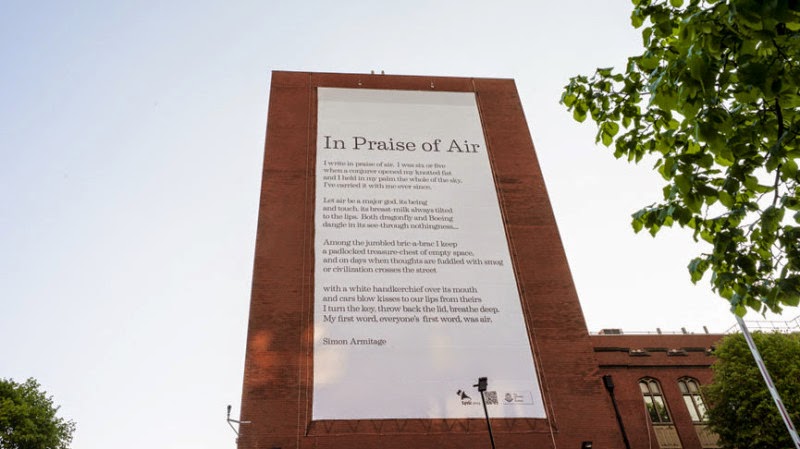 The world’s first air-cleansing poem, which has removed more than two tonnes of pollution from the environment, is being auctioned off to help in the battle against lung disease in Sheffield.

The poem, ‘In Praise of Air’ written by Simon Armitage, professor of poetry at The University of Sheffield has been transformed into 12 limited edition art works.

The sections of the poem were stretched onto frames and signed by Armitage for auction.

The auction, in aid of The British Lung Foundation, will take place at 99 Mary Street, Sheffield at 7pm tonight.

The poem was written on material developed by Sheffield scientists that is capable of purifying its surroundings through catalytical oxidation.

When the material the poem is written on combines with atmospheric oxygen, it can help reduce pollution in the surrounding area.

Professor Jo Gavins, who leads the project from the University of Sheffield’s School of English, said: “The nitrogen oxides that ‘In Praise of Air’ helped to remove from the atmosphere during its time on the wall of the Alfred Denny building are a major cause of lung diseases.”

The University of Sheffield’s School of English hope the poem and its air-cleansing technology developed by the School of Science will be replicated on billboards and artworks in towns and cities worldwide to combat pollution.

Professor Jo Gavins, added: “We’re delighted to be celebrating the end of our project by reusing the catalytic poem material and supporting the British Lung Foundation, who fund essential research on the prevention and treatment of lung diseases. Our final catalytic poetry event on Tuesday will ensure that our project has a lasting legacy.”

Sean Barton, Junior Public Relations Officer at the University of Sheffield said: “We are expecting a turn-out of at least 70 people, as this is the amount that have registered but it is an open event so more people could turn up on the day. Mr Armitage is open to doing something similar in the future, but all depends on the success of tonight’s event.”