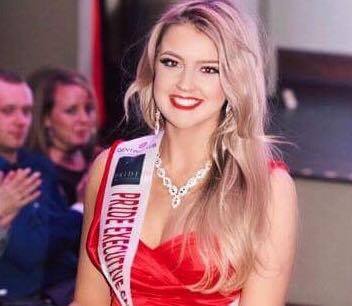 She achieved third place at Miss Nottingham , second at Miss Sheffield and about to complete for Miss Derby.

Miss Hardy would really want to become a role model to the younger generation and to inspire them. Turning their bad experiences into something positive.

‘One important influence for me is that I lost my dad when I was younger and I would like to help more young people with their bereavement and mental health. 100 children a day lose a parent and there’s no help from the NHS as well as 1 in 4 young people having a mental illness’, she said.

She was first scouted a few years back at Clothes Show live Birmingham and was asked if she would like to participate in Miss England. It was her first ever beauty pageant contest and she claimed it was ‘absolutely terrifying’, but she still managed to achieve second.

Although Hardy has not win a regional title yet but she explained competing as a beauty pageant allows her to meet many people and most importantly able to raise money and awareness for charities such as ‘Beauty with the purpose’.

Hardy also provide some tips on dieting. She explained she goes for a really strict diet few weeks prior to a contest with no carbs for two weeks and drink plenty of water to get clear skin. But explained it is difficult to stay healthy as a university student with take away everywhere!

She will also be competing in Yorkshire beauty award next Sunday.