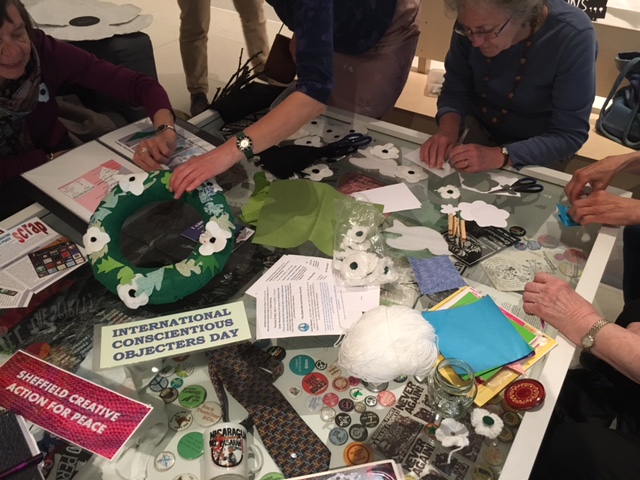 Sheffield Creative Action for Peace (SCRAP) held a drop-in session in the city on Thursday, ahead of their International Conscientious Objectors Day event which will be held at the weekend.

They were founded in December 2013 and have a core group of six or seven members, with informal meetings every two weeks that are open to anyone.

The group are anti-war but try to focus on specific issues and have protested about both trident and drones in the past.

At the drop-in event, held in the Millennium Gallery’s protest lab, people had the chance to help make white poppies with members of the group, which will be used on Saturday when they mark International Conscientious Objectors Day for the second time.

International Conscientious Objectors Day is held on May 15th every year and celebrates those who have and those who continue to refuse war.

Sheffield Creative Action for Peace will be marking the event on Saturday May 13th in Sheffield city centre.

The group will assemble in Sheffield’s Peace Gardens, where they will have a peace choir singing songs for peace and hear testimony from conscientious objectors.

They will then walk to the Cenotaph in Barker’s Pool, where the group will lay a white poppy wreath in recognition of conscientious objectors around the world.

This is the second successive year that SCRAP are marking the event and member Jill Angood, explained what they are aiming to do.

She told me how the group wants to ‘make a presence’ about people who work for peace, ‘paying respect to those who campaign for it’.

Hilary Smith, a founder member of Sheffield Creative Action for Peace, told me why the group is marking International Conscientious Objectors Day.

Today was the first time that SCRAP had appeared at the protest lab.