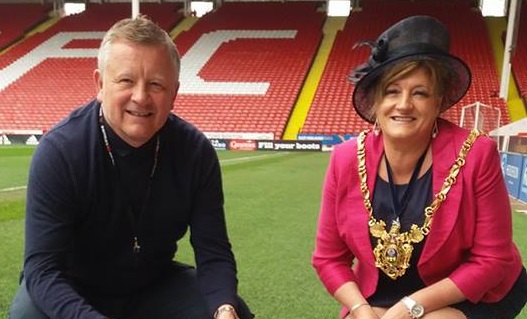 Sheffield United manager Chris Wilder has signed a banner celebrating promotion which will be auctioned off to raise money for one of the Lord Mayor’s chosen charities.

The banner celebrates The Blades’ League One-winning season, and was displayed outside the Town Hall when the team paraded through the city on 2 May.

He signed it at Bramall Lane alongside the current Lord Mayor, Denise Fox. He also added the initials ‘UTB’, which stands for Up The Blades.

Mrs Fox is now taking sealed bids for the banner from members of the public, and the money raised will go to one of her four chosen charities. She supports St Luke’s Hospice, Sparkle Sheffield, Support Dogs and ABF The Soldiers’ Charity. This year she has raised more than £20,000 for them.

She said: “It’s great that Chris has signed this banner which will mean so much to Sheffield United fans across the city – we’ll hopefully raise a considerable amount for charity.”

People have until the end of May to make a winning bid for the banner. To make an offer, email lordmayor@sheffield.gov.uk.