Anti-fracking campaigners unite in Sheffield for Global Day of Action 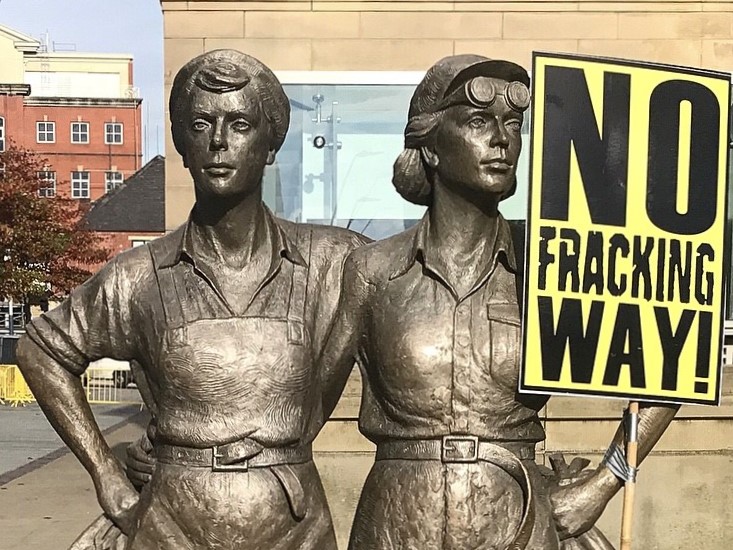 There were deflating dinosaurs, a samba band and an MP as environmental activists gathered in Sheffield for a worldwide charity campaign.

Around 100 people assembled outside City Hall on Saturday 14 October as part of the rally organised by Friends of the Earth.

Approximately 400 events were held across the world for the charity’s Global Day of Action for Climate Justice. Each event had a different theme suited to the issues in its area, with Sheffield’s rally aiming to prevent fracking.

The MP for Sheffield Central, Paul Blomfield, opened the event with a speech that gave a political perspective on fracking.

The Shadow Brexit Minister said: “It’s great to see so many people here in terms of the range of organisations, the range of different parts of the city and beyond the city in South Yorkshire because there is real strength in the depth of concern about the government’s policy on fracking.”

There were then speeches from multiple campaigning group representatives, including Deborah Smith from Sheffield Climate Alliance and Tina-Louise Rothery from Frack Free Lancashire.

In October 2016, the Secretary of State for Communities and Local Government, Sajid Javid, approved an appeal from Cuadrilla to overturn Lancashire County Council’s refusal to give permission to frack at their Preston New Road site on the Fylde.

Ms Rothery shared Lancashire’s experiences with fracking and spoke of the resilience of climate change campaigners against a political force.

She said: “The government would like it to be a battle between the police and rowdy activists… but we will not be put down by this and we will not fear it and we will not allow it to take the air because one line behind the police who are just above that are the real enemies.

“We must always maintain our focus on them. Whatever they throw at us they can throw it because nothing will be as bad as fracking so it doesn’t matter.”

Following the speeches, the Sheffield Socialist Choir performed climate change-inspired songs, and handed out lyric sheets so that the audience could join in.

A report published earlier this year by the Department of Business, Energy and Industrial Strategy said: “The government believes that shale gas has the potential to provide the UK with greater energy security, growth and jobs. We are encouraging safe and environmentally sound exploration to determine this potential.”

Preston New Road Action Group and campaigner Gayzer Frackman launched a legal challenge against against Javid’s decision for fracking in May and are currently waiting for a ruling to be made at the Court of Appeal.