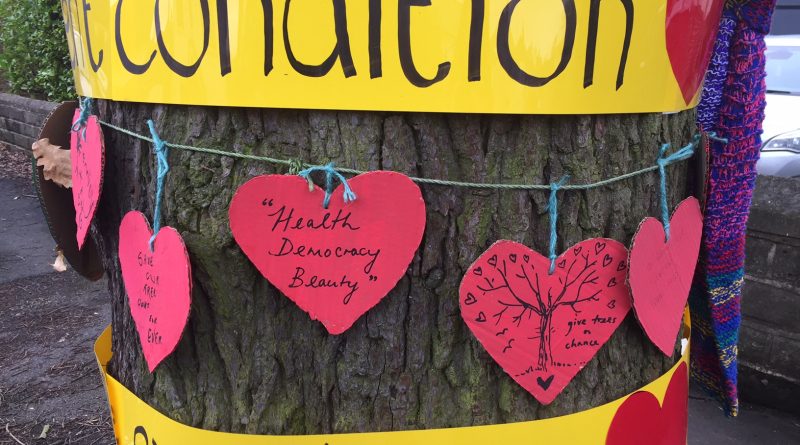 An activist scaled a 150-year-old oak tree in Dore on Monday in an attempt to prevent it being felled by the city council.

A notice was displayed by Sheffield City Council on Vernon Road in Dore last week to announce that the Vernon Oak would be cut down this week. Campaigners have responded by protesting all week, holding candlelit vigils, and decorating the oak with yellow ribbons.

Since the controversial ‘Streets Ahead’ project began in 2012, around 5,600 trees have been felled. The project has created a bitter public row between activists and Sheffield City Council. The 25-year highways maintenance project will see thousands of trees felled.

Whilst the city council is insistent that trees earmarked for felling were “dangerous, dead, diseased, dying, damaging or discriminatory”. Campaigners have argued that many of the earmarked trees are healthy and should not be cut down.

The Independent Tree Panel, which is an impartial panel of experts who review felling decisions, said the Vernon Oak was “a very fine specimen, in excellent condition, with a further 150 years’ life expectancy”.

TV presenter Vernon Kay has appealed to Sheffield City Council to re-assess the felling decision on Vernon Road in a plea to save the much-loved oak. Mr. Kay said it was the situation was a “travesty” and added “trees are the lungs of the planet, everyone knows that.”

In response to the city wide felling campaign group, ‘Trees of Sheffield’, are holding a rally in the city centre on the 21st October.

Trees of Sheffield have said “We are hoping to achieve our voice being heard, and listened to by Sheffield City Council. The passion is innate, Sheffielders are born with steely resolve and warm friendliness.”