Genre-defying and opinion-splitting Nottingham duo Sleaford Mods are returning to Sheffield to perform at the O2 Academy on Friday night.

The pair, comprised of articulate and furious vocalist Jason Williamson and special-brew-swigging producer Andrew Fearn, are on a UK-wide tour to promote their album “English Tapas”, which was released on the famous Rough Trade record label in March.

“English Tapas” reached a high of 12 in the UK album charts and has received numerous glowing reviews and accolades, including being up for “Album of the Year” at the Q Awards.

Many in music circles have said that it is a mystery as to why the album was not nominated for the prestigious Mercury Prize.

The Mods are known for their abrasive style, with Williamson spitting venomous rants aimed at everyone from David Cameron’s hairdresser, to fellow musicians, and to someone he bumped into in the park.

This has brought as much negative attention as positive, with the Daily Mail a notable critic of the band’s attacks on the Conservative government, in particular some comments made about Boris Johnson in one track.

The support act for the evening will be Sheffield based all-female synth-punk outfit Nachthexen (meaning Night Witches in German), who are very much cut from the same cloth as the headline act and will no doubt be hoping to garner new support from the Mods’ fans.

You can watch Sleaford Mods in full flow here:

GCSE music at Sheffield school left on a good note 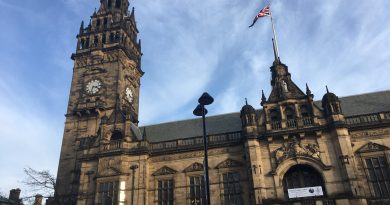