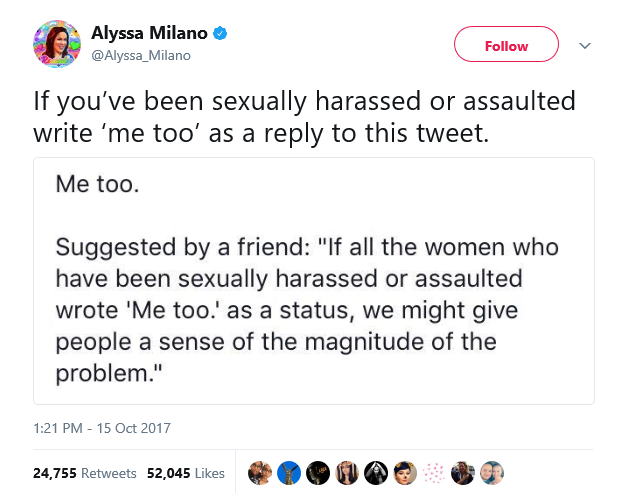 The news of Hollywood producer Harvey Weinstein’s casting couch broke over a week ago, yet the story of his inexcusable behaviour is not new. Rather, this behaviour is something that women, and men, all over the world have been a victim of for decades. Behaviour inflicted upon them by people of power, strangers, friends and partners. So why has it taken so long for people to finally speak out?

The truth is, people do speak out. All the time. But it can seem that no one listens. According to UltraViolet, a campaign that aims to “fight sexism and create a more inclusive world that accurately represents all women, from politics and government, to media and pop culture”, over 99% of perpetrators will walk free and 3 out of 4 women who report harassment in the workplace will face retaliation. These are numbers that need to change.

American actress, Alyssa Milano, 44, took to twitter to talk about her ordeal, starting the hashtag #MeToo as a way to encourage women to share their stories. Since then, the hashtag has been shared millions of times on Twitter, Facebook and Instagram, with men and women of all ages, religions and backgrounds speaking out about being sexually harassed. Still, the problem lies that we only speak out about the stories we can bare to tell.

Sexual harassment isn’t something considered to be dinner table etiquette. The powerless and vulnerable emotion it can leave in its wake is a feeling that many people share, just not with each other. While the hashtag is brilliant, we need to continue encouraging people to speak up about their struggle, even when it isn’t trending.

The #MeToo movement is beyond a hashtag however, it points out a systematic flaw in the way people deal with sexual harassment. Instead of fighting the cause, people continue to just deal with the symptoms. Where millions of people are speaking out about their harrowing experiences, there are also people responding by shifting the blame, to ‘what were you wearing,’ ‘how short was her skirt,’ and the golden statement of sexual harassment denial; ‘I bet they were asking for it.’

An Australian journalist, Benjamin Law, 35, encouraged men to join in the hashtag #HowIWillChange. Another hashtag with both positive and negative responses. Many men took to twitter to admit their own guilt and pleaded to change by calling out sexism and harassment when they see it, rather than standby and watch. There is a minority that continue to claim that it’s “not all men”, which is fair enough. Men are continuously to blame for being the perpetrators of sexual harassment when as a matter of fact, women are also the culprits of this accusation. So no, it’s “not all men”, but you can’t deny that it is one too many.

A hashtag on social media will not put an end to sexual harassment but it has opened the door to conversations that were previously ignored, or never even spoken about. The gravity of the situation is too big to be overlooked, yet we must be patient. We must allow those who have been a victim to these ordeals to come forward on their own terms and provide them with the comfort that no matter what, they will have a support system to help. So no, #MeToo is not the perfect solution, but it’s a good place to start. 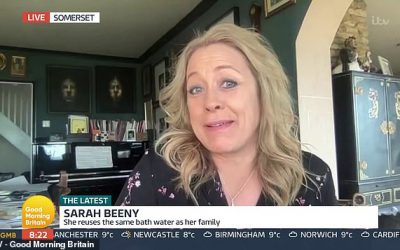 Channel 4’s Sarah Beeny recently admitted to sharing bathwater with her family. Harry Robinson took to the streets of Sheffield to discover whether locals would do the same.