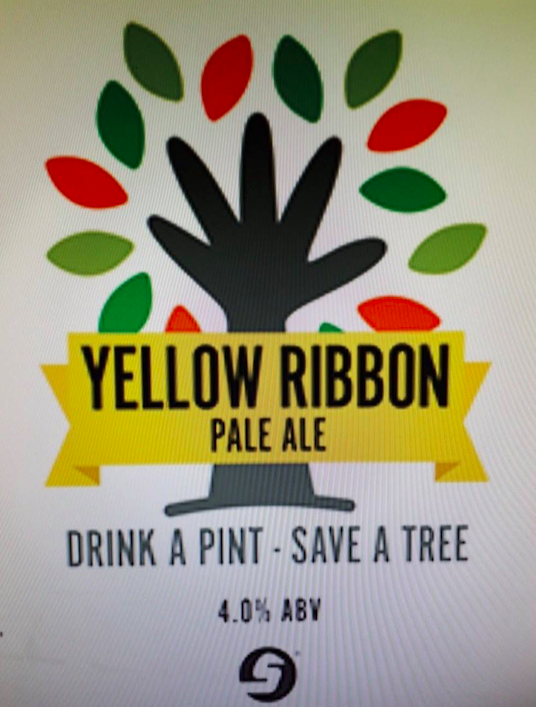 A Sheffield brewer has produced a signature cask ale that will raise money for residents fighting the felling of Sheffield trees.

Exit 33 Brewing, a real ale brewery, have produced ‘Yellow Ribbon’, so called because of the yellow ribbons wrapped around trees in Sheffield, signalling that they are to be felled.

For every pint of Yellow Ribbon sold, 10p will be donated to Sheffield Tree Action Group, STAG, to help cover the legal fees of those fighting to save the trees.

Pete Robinson, owner and head brewer at Exit 33 Brewing, said: “The trees are one of the only things that have brought this city together, and one of the few things that I truly care about. By making Yellow Ribbon we can show people that we really care”.

This is not the first charity brew that has been produced by Exit 33 Brewing, in the summer of 2015 they brewed a ‘Charity Pale’, which gave a donation to homeless young people with every pint sold.

STAG is the umbrella group which represents a number smaller action groups across the city, who have all been campaigning and protesting to prevent the mass-felling of a potential 6,000 trees since 2012 by Sheffield’s ‘Streets Ahead’ highway renewal programme, run by Amey on behalf of Sheffield City Council.

“The Council keep falling back on the survey, but no-one I know actually got asked. It was all people in places not affected by the trees, they didn’t ask the people who really care because they knew what the answer would be.”

Mr Robinson has been brewing for almost a decade, in a warehouse in the East of Sheffield. Speaking further about the tree felling issue, he said: “We won’t let the council bully us on this issue. We will raise some money for the trees but ultimately it will raise awareness, which is more important.”

An event is being held tomorrow at the Harlequin Pub, which is owned by Exit 33 Brewing, to mark the release of Yellow Ribbon.