Sheffield taken over by spook-filled festival at the weekend 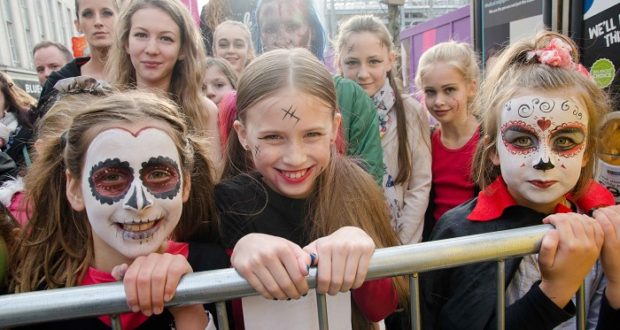 The streets of Sheffield were flooded with all things terrifying this weekend as the Out of This World festival returned to the city for the fourth time.

Dozens of spectators joined in with the events and donned as costumed characters on Sunday as the city celebrated Halloween.

The event was split into three zones each with their special theme; Sci-fi, Magic and Halloween.

Sci-Fi fanatics were treated to a visit by iconic characters such as Darth Vader, Iron Man and Stay Puft whilst Storm-troopers and Daleks patrolled the Town Hall.

Pepper, a robot created by the University of Sheffield’s robotics team also made an appearance alongside roaming dinosaurs and the Jurassic Park vehicles.

Illusion and trickery were apparent in The Magic Zone as some of the UK’s best magicians, such as Dr Diabolo and Sam the Scam, showcased their best tricks for the crowds. A Flea circus also appeared at the festival, which included a flea cannon ball and Dare Devil Danny, a flea high diver who performed death defying stunts throughout the weekend.

Children looking for a scare in the weekend were entertained by The Little Monsters Zone on the Moor, they were able to get involved in everything from meeting a caged mummy to getting their face painted.

Great out of this world event today #Sheffield pic.twitter.com/auhG1JDtn2