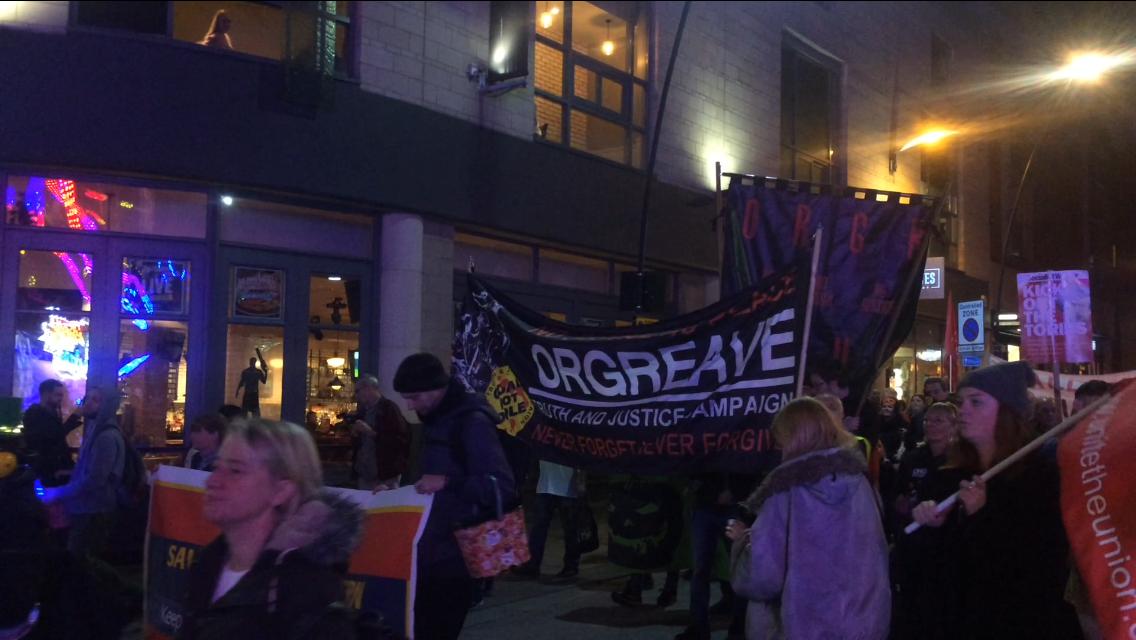 The #DeathofJustice rally took place in Sheffield this week in protest against the lack of inquiry into the Battle Of Orgreave.

The ‘battle’, that took place on 18 June 1984 during a year-long strike through to 1985, saw miners on the picket lines clash with police after protesters prevented the delivery of lorries carrying coke to fuel steel furnaces in Scunthorpe.

Miners suffered injuries and no charges were brought against the police.

Hundreds of protesters marched from Devonshire Green, through the city centre to the law courts led by a band, with many holding banners, in fancy dress and chanting through megaphones flanked by police.

The organiser and chair of the campaign, Joe Rollin, said: ’’Everyone’s pulled their weight, I’m so happy with the turnout.’’

See more on what Mr Rollin said, plus footage from the event.

The protest was attended by ex miners with other individuals and campaigning groups also turning out to show their support.

Julie Graham, from Sheffield Against Fracking, said: ‘’There are people here from all different organisations that recognise its an injustice and needs righting, it’s the same as Hillsborough, it needs an inquiry and needs to be open to the public.

‘’Orgreave is a massive event on the scale of Hillsborough and it demonstrates police injustice where protesters were beaten by the police.

‘’We directly correlate the injustice of the government enrolling the police in doing their dirty work, that’s what they’re trying to do with communities that are under threat of fracking.’’

Jerry, an ex railway worker who didn’t want to reveal his surname, said: ‘’ The whole way things were dealt with was an absolute disgrace, miners were brutally beaten and framed on these charges and we want to see justice, even though it’s all these years gone by.

“There should be an inquiry into Orgreave, but not just Orgreave but also the whole of the miners’ strike.

“The policing was absolutely horrendous and more in line with something from eastern Europe rather than what it was in the so called ‘western democratic state’.’’

Sheffield Socialist Students secretary, Aenor Rose, said ‘’We went to support the march for several reasons but the most important one in my opinion is simple, solidarity.

“Obviously we’re a student group, but if we focus only on student issues, there’s wider problems that will be left untouched. Things like austerity, privatisation, anti-union laws, and police brutality affect more than just students, and it’s important to stand in solidarity rather than looking out only for our own interests.’’

More information about the protest, which was held on Tuesday 31st October, can be found here: