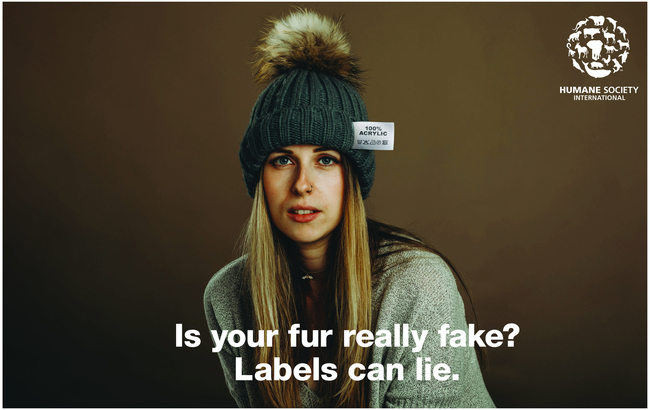 Lush Cosmetics have teamed up with an international animal protection company to raise awareness of the mislabelling of fur.

The campaign that Lush have launched in partnership with Humane Society International is called ‘#WhatTheFur’.

The idea of the campaign stemmed from reports that came out earlier this year revealing the mislabelling of fur by retailers such as House of Fraser and Missguided.

The reports revealed that such retailers had sold real animal fur products as ‘faux’ fur on items such as hats and Pom Pom key rings.

Claire Bass, executive director of Humane Society International UK told Fashion United: “Partnering with Lush gives us a unique opportunity to reach shoppers across the country who are unaware that trusted brands and independent retailers alike can be caught out selling real animal fur at deceptively cheap prices, described as “faux” or “100% acrylic”.

Many shoppers believe that fur was banished from the UK high street back in 2003 when the government forced the last UK Fur Farm to close its doors, but retailers are now importing fur cruelty from overseas.

The window campaign uses lenticular technology on poster boards to show a woman in a fur bobble hat that morphs into a fox on a fur farm.

It’s also being supported in store and online with free wallet-sized guides you can pick up or download that outline the differences between real and faux fur.

Humane Society International are an animal protection organisation who aspire to protect animals around the world.

They’ve created a petition on their site that backs up this campaign in the hope to urge the government to make Britain fur-free.

Their goal is to ban the sale of fur items, or at the very least, to enforce stricter labelling laws.

Vegan activists on Instagram, such as Sonia Garcha (@soniathevegan) have shown their support for this campaign using the hashtag #FurFreeBritain.

To get involved with the petition visit here.