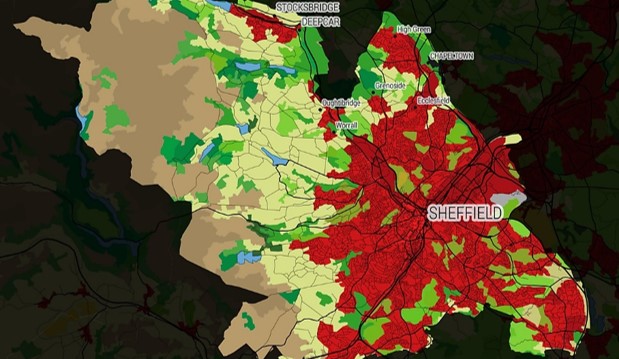 A Sheffield lecturer’s new publication has broken down the city’s modern environment along with the rest of the UK.

Dr Alasdair Rae, Urban Studies and Planning lecturer at the University of Sheffield, created the maps using information sourced from the Ordnance Survey and Corine, an EU programme which examines the environment .

According to the data, Sheffield is 29% built on compared to a 6% UK average – to be expected given Sheffield has the third largest population of any city in Britain at 552,698 according to the 2011 census.

The survey also shows that Sheffield is 25% farmland compared to a 57% average across the UK, with the detailed mapping showing a large strip of pastures splitting the city centre in the east from the moorland to the west.

Other insights include that the city has a 37% natural composition compared to a 35% average across the UK; however, this second figure is high only due to Scotland’s mostly untouched environment at 71% natural raising it. Sheffield can boast an environment being well over double as natural as the English average at just 15%.

The newly-released information is part of Dr Rae’s new publication ‘A Land Cover Atlas of the United Kingdom’ that examines the whole of the UK with high resolution maps for all of the country’s 139 local authorities.

Writing in his publication on why he made the maps, he said: “How much of the UK is urban? How much is arable land? How much is forest? Questions like these arise from time-to-time in the media, in  policy discussions, and also in conversation, so that’s one of the reasons why I decided to undertake this Atlas project.

“I wanted to understand better what the United Kingdom is made of.”

You can see a full list of his published maps for other UK locations here.

Copyright rests with the European Commission; Acknowledgement: Produced by the University of Leicester, The Centre for  Landscape  and  Climate  Research  and  Specto  Natura  and  supported  by  Defra  and  the  European  Environment  Agency  under  Grant  Agreement  3541/B2012/R0-GIO/EEA.55055  with  funding  by  the  European  Union.