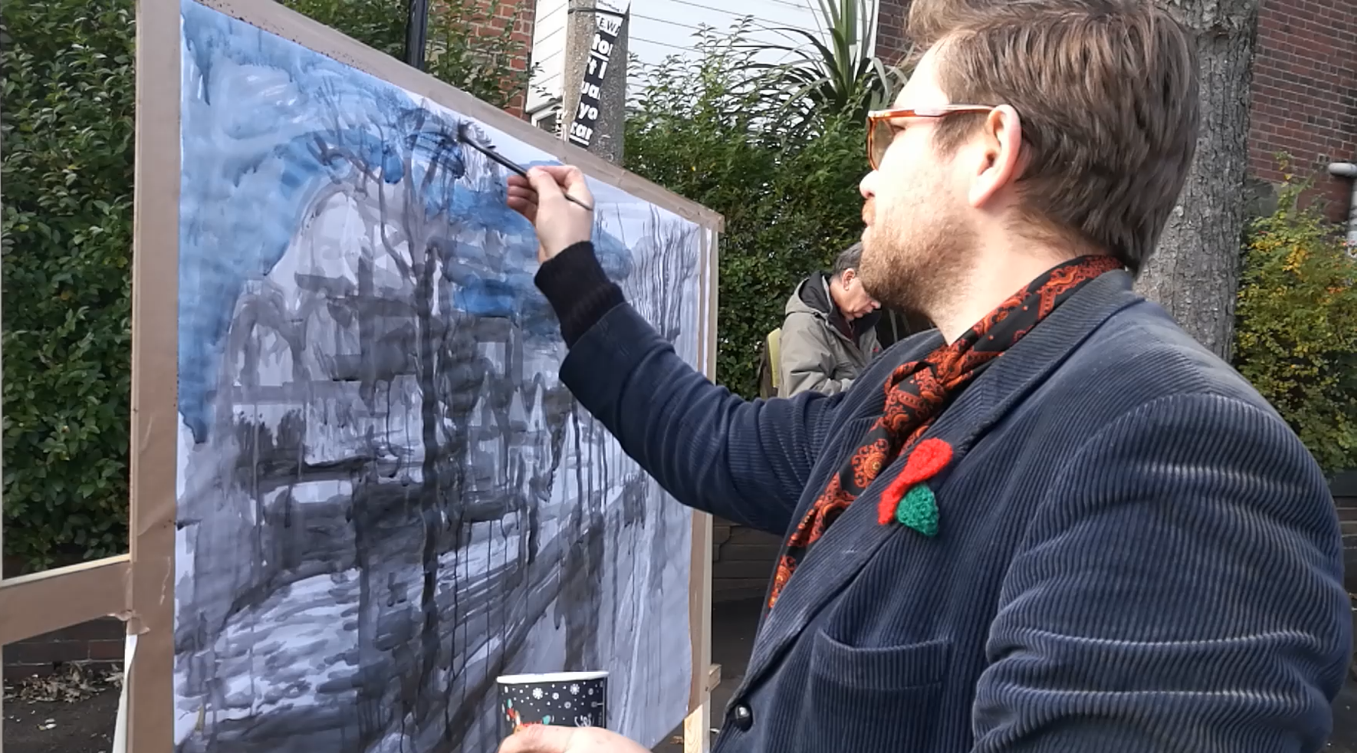 Trees marking Sheffield’s fallen soldiers, under threat due to the Council’s ongoing tree felling programme, have been painted in an Armistice Day event.

Professional and amateur artists from Sheffield and across the country gathered on Western Road, Crookes on Saturday to memorialise the dead and call to protect the historic trees.

They were led by artist and organiser Dan Llywelyn Hall who has painted the Queen as well as the last surviving veterans of WW1.

On the importance of the trees, he said: “These trees are unique amongst those in Sheffield in the sense that they are a living war memorial.

“There’s no better way to commemorate them and to reverence these living things than to sit here all day drawing them.”

The event began with a remembrance parade followed by a wreath laying service and sombre performance of The Last Post, all before a two-minute’s silence.

Local politicians and activists in support of the mass painting were some of those in attendance; Alison Teal, Green Party Councillor for Nether Edge and Sharrow, said: “It’s amazing that we have all these talented people who are genuinely interested and caring about this city.”

“Many don’t live here but they’ve heard about the situation and they really appreciate the passion of the campaigners.”

Last month, a high court found she had not broken an injunction forbidding her and other activists from stopping trees being felled whilst Calvin Payne, the leader of much of the protest action against the Council, was given a suspended sentence.

“They’re a living memorial and I think it’s incumbent on the council to do all they can to protect these trees and nurture them rather than remove them due to interference with the curbs.”

The trees were planted in 1919 to remember the 64 pupils who attended Western Road Council School, now called West Ways Primary School, who lost their lives fighting in The Great War.

Despite the trees being a recognised living war memorial by the War Memorials Trust and the London Imperial War Museum, 23 of the trees are currently planned to be felled as part of the City Council’s ‘Streets Ahead’ programme.

Several of the trees have been marked as diseased or dangerous to pedestrians and vehicles under the proposals; however, many campaigners dispute this.

Local anti-felling campaign No Stump City says the council is refusing to look at engineering solutions and are instead tied-down to a £2.2bn contract with Spanish infrastructure company, Amey.

Alan Story, a Western Road resident and member of No Stump City, said: “It’s about privatisation. They’re privatising the road, privatising the trees and it’s all being controlled by a foreign multi-national in Spain. They’re the ones who are calling the shots when all’s said and done, not Sheffield City Council.”

The grassroots group recently fulfilled their online crowdfunding target of £750 to fund their campaigning and say that support is building.

“We’re getting ourselves better organised here but what we believe in now is the need for more political action over this, and hopefully events like this can raise that.”

The artwork from the event will be available to see at an exhibition called ‘Fallen Boys, Standing Trees’ in Yellow Arches Studios from November 24 until December 3.