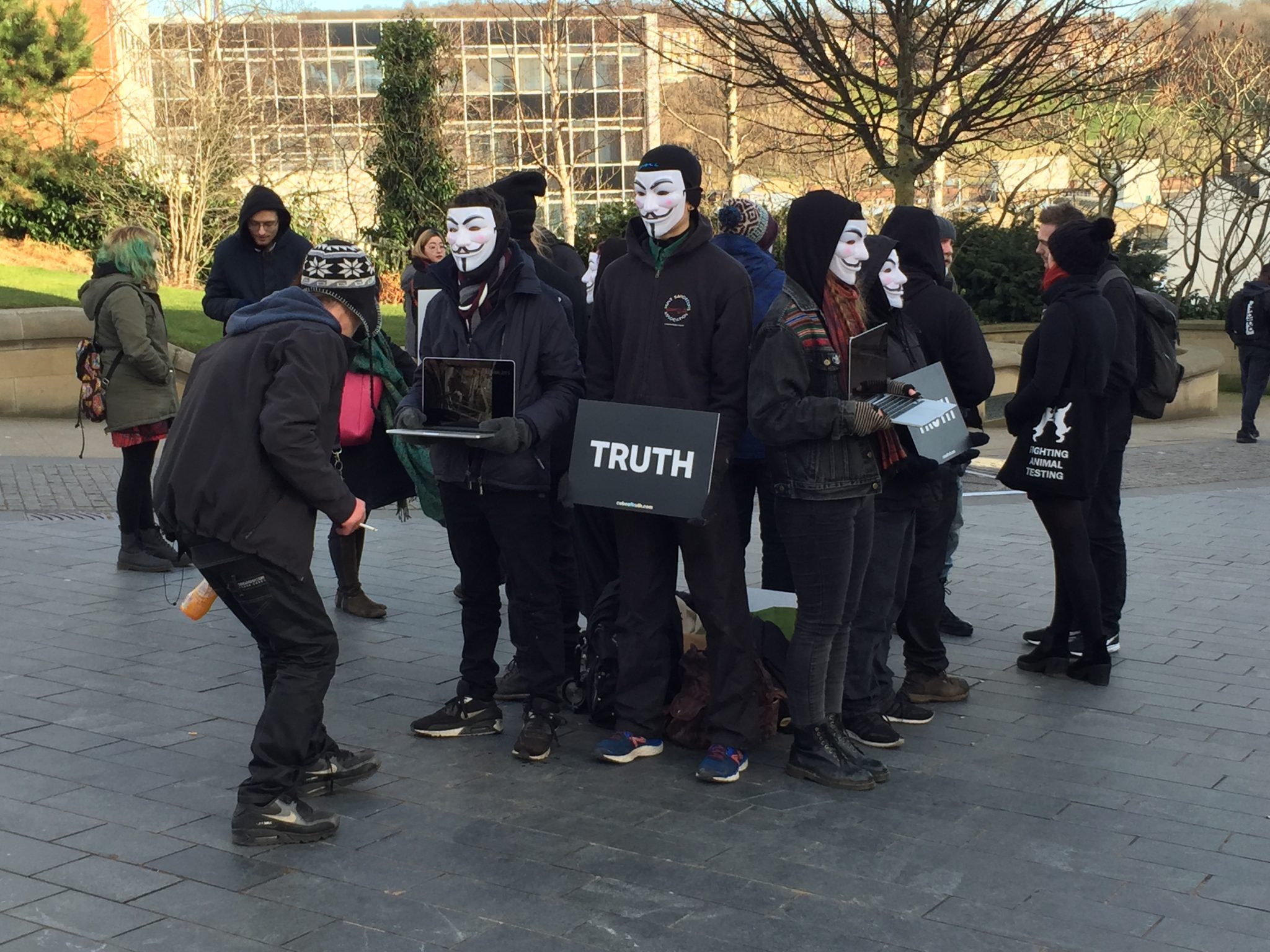 Anonymous for the Voiceless, an animal rights organisation, held a Cube of Truth event in Sheffield yesterday afternoon, demonstrating against the meat and dairy industry.

Members of the organisation stood in cube formation, wearing V for Vendetta masks and held laptops which depicted graphic footage of farming processes in the UK.

Anonymous for the Voiceless carry out street activism and have held 2,308 demonstrations in over 404 cities.

Commuters passing by The Globe Inn on Howard Street looked on intrigued, with some tearing up at the footage and some stopping to ask questions.

Connor Laverty, 21, who stood in the cube formation, said: “If slaughter houses had glass walls people wouldn’t eat meat and so it’s about showing them what is actually happening and then allowing them to make a decision on what they’ve seen.

“We are absolutely not extremists when you look at the fundamentals of what we are doing. It’s fighting for animal rights, it’s fighting for compassion and the stigma that vegans have at the moment is ignorance. If people don’t understand something they judge it.”

The group holds an abolitionist view on animal farming and aims to equip the public with information regarding a vegan lifestyle and directing people to resources such as Vegan 22.

An online 22-day vegan programme where those who sign up are provided with recipes, tips and a mentor to assist with the challenge.

Various members of the public heckled the demonstrators and expressed distaste for the footage being shown.

According to the National Farmers Union, over 95% of British dairy farmers are Red Tractor assured, which means that the farm is independently inspected to maintain animal welfare standards.

The dairy industry produces 14 billion litres of milk a year, contributes £6 billion to the UK economy and provides around 80, 000 jobs.

“British dairy farmers are rightly proud to rear their animals to the some of the highest animal welfare standards in the world and do their utmost to ensure that the public is supplied with quality milk every day of the year.”

Mr Heart said: “We want to save the animals, we don’t hate farmers that’s not our agenda at all. We want farmers to move towards sustainable crop farming, where they are not killing animals, so there is not hate towards farmers, we’re just trying to raise awareness to help people realise that eating meat is unnecessary.”

Over 98% of the British public consume meat and dairy products as part of their diets, according to the National Farmers Union.

We interviewed vegan activist Karl Beaumont, 24, regarding yesterday’s Cube of Truth demonstration. The following footage contains sensitive material, which may offend some people.