Sheffield-based boxer Kell Brook has been named by former world champion Amir Khan as someone he’d relish the chance to fight in the near future.

Khan’s comments came just hours before Brook held an open training session at the Crucible in Sheffield, which was well attended and featured training from Brook and his undercards.

Brook, 31, has enjoyed a hugely successful career, winning 36 of his 38 fights with 25 knock outs, however he has lost his last two fights and was rumoured to be considering retirement.

Both Khan and Brook have fights scheduled for the coming months, fighting Phil Le Greco and Sergey Rabchenko respectively.

Sheffield boxing legend Glyn Rhodes MBE believes the fight has huge potential public interest, saying “It’s the only fight that either guy wants to be a part of. To tell you the truth, who’s really bothered in the public about who Khan or Brooks are fighting right now? The only fight that the public, or anyone in either camp, is interested in is a Khan-Brooks fight.”

Brook admitted earlier in the year that 2018 may be his last year of fighting, however at the same time he emphasised that a fight against Khan was something he wanted, and urged the Bolton-born fighter to make the fight a reality.

Rhodes went on to emphasise how important the fight could be to the careers of both men, and said “The problem then is where the loser goes, because the winner will go onto bigger and better things. It’s a great fight whether you’re a Brooks fan or a Khan fight. People want the two big British fighters going against each other, and the fight just needs to get made.”

Brook trained for 20 minutes today, going through a range of drills to highlight how far he has come since sustaining a broken eye socket in January 2017.

Brook fights Rabchenko on the 3rd March, at the FlyDSA Arena in Sheffield.

Interview: Boxer Jordan Gill is dealt another blow as his latest fight is cancelled

Fury’s a knockout with Sheffield crowd 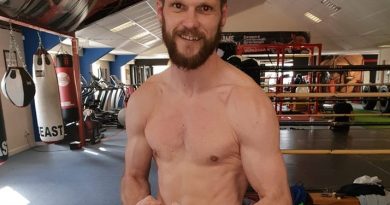