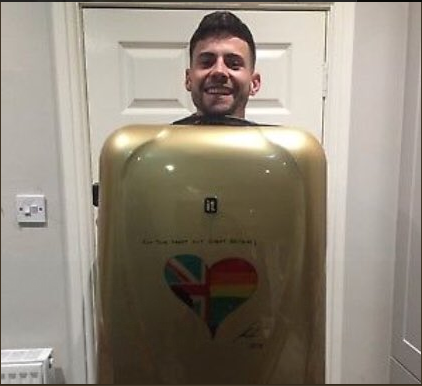 The suitcase that reality star Andrew Brady used for his appearance on this year’s series of Celebrity Big Brother has been sold for over £7000 in a charity auction for Sheffield Mind.

The gold case, featuring Brady’s signature and a design hand-drawn by the man himself was put up for sale on eBay for just £0.01, and by the end of the bidding a week later it had gone to a mystery bidder for a whopping £7200.

Aimee Stancer, a volunteer at Mind’s Wellbeing Centre, said: “It is absolutely fantastic news for Sheffield Mind and we are so, so grateful for the amazing gesture. Everyone was massively shocked by how high the bidding got to.”

“The money raised is much needed funding that is invaluable towards us continuing to improve mental health in Sheffield.”

The design on the front, featuring the slogan ‘Eat Your Heart Out Great Britain’, was inspired by Brady’s friend’s charity FunknDoodle, which uses drawing to help relieve people of anxiety and stress in Sheffield. Ms Stancer continued: “We have since done some work with FunknDoodle at the Sheffield Mind Wellbeing Centre where our staff tried out doodling to relieve stress, which was really fun.”

A unique chance to get your hands on my signed and doodled @bbuk gold suitcase courtesy of FunknDoodle. Proceeds will be donated to @MindCharity ❤️I’m no Picasso but it’s for a great cause. I call it “Eat your heart out Great Britain”🏳️‍🌈happy bidding https://t.co/QZrCM4raTY pic.twitter.com/QgPAZlTVUx

Congratulations to the person who has won #CBBAndrew suitcase! £7,200. What an incredible amount of money it’s going to do so much good at @SheffieldMind You must be so happy & proud @itsandrewbrady It was a great thing to do Andrew!! Lots of love forever and always from Kerry xx

Well done Andrew! That's an amazing total 🙌🏽 Such a great cause. It's so important to talk about Mental Health & take away the stigma. #MentalHealthMatters

Brady, who is a Sheffield native, was one of the most popular housemates with fans of the show despite only finishing 11th out of 16, and his relationship with eventual winner Courtney Act was one of the biggest talking points.

He was also a contestant on latest series of The Apprentice at the end of last year, and was fired by Lord Sugar in the eighth week of the programme.

Sheffield Mind is one of 170 local associations around the country that are affiliated to the national Mind charity, and has sought to help people suffering from issues with mental health since it was created in 1971.