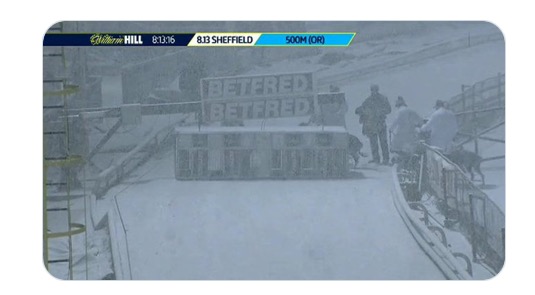 The group are a greyhound protection group whose main aim is to raise awareness about greyhound exploitation within the industry; their tweet has received 164 retweets already, and has sparked a vicious debate.

Rita James, a representative of the group stated: “The dogs could have died. It’s a welfare issue. In every race, there is a risk that a dog will fall, and the possibility of that risk increases in the bad weather.”

She continued to say: “The industry claims the welfare of their dogs is a priority, but in conditions like this, their continuation of races states otherwise. C.A.G.E.D. Nationwide fight to stop events like this from taking place, because the dogs interests are vital to us.”

Owlerton Stadium have further cancelled today’s race meeting in the interests of their greyhounds, trainers and staff, due to extreme weather.

The stadium helps raise money each year for charities, local clubs, teams and groups by inviting members of the public to host sponsored races and holding fundraising evenings.

Mrs May said: “Greyhounds were bred for racing. They enjoy running at high speeds. I understand why there has been some upset caused by racing in cold conditions though. But my dogs love the snow!”