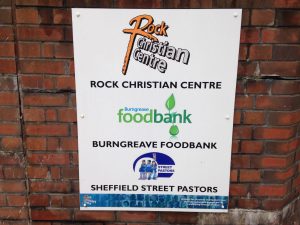 Food banks have been struggling with the increase of people needing their help with Sheffield handing out 23,000 emergency packages over the last year.

The Trussell Trust is an anti-poverty charity that runs a network of 428 food banks across the UK.

The trust has distributed 1,332,952 three-day emergency food supplies to people in crisis between 2017-18. This is a 13% increase from the previous year.

Emma Revie, Chief Executive of Trussell Trust, said: “It’s hard to break free from hunger if there isn’t enough money coming in to cover the rising cost of absolute essentials like food and housing.”

There are 7 food bank located around South Yorkshire.

Burngreave Foodbank opened in 2012, as part of the Rock Christian Centre, and was a way of helping the local community through packages of ‘cereals, milks, fruit juices and tinned meat’.

Rachel Snow, manager of Burngreave food bank, said: “In the first 4 years it’s grown in numbers but we have not seen an increase in the last couple of years, it’s been fairly stable.”

Miss Snow added: “People who need the help of the food bank tend to be people who are between benefits or they can’t get money straight away. We also see people are on a low income or who have had some sort of crisis.”

Ms Revie adds: “Universal Credit is the future of our benefits system. It’s vital we get it right, and ensure levels of payment keep pace with the rising cost of essentials, particularly for groups of people we know are already more likely to need a food bank – disabled people, people dealing with an illness, families with children and single parents.”

The Trussell Trust is calling for benefit levels to be in line with the raise in the cost of living.