A potential candidate for Walkley is calling out for more women to vote in the local elections.

Ann Butler, member of the Women’s Equality Party, is hoping to see more Walkley residents at the polling station after a low, 35% voter turnout in 2016.

She said: “It’s been 100 years since some women got the vote nationally and we would like to try to make people feel that by using the vote they are getting their voice heard and that it’s an essential thing to do.”

It was only in 1928 that women were given equal status to men and the voting age was reduced to 21.

Sheffield celebrated 100 years of women’s right to vote in February marking the passage of The Representation of the People Act 1918.

The city was the first in the UK to form a women’s suffrage society: The Sheffield Women’s Political Association.

Charlotte Mead, campaign manager for the Sheffield’s Women’s Equality Party, said: “People who are not voting in local elections have got a huge amount of power to completely change things if they wanted to, they just have to have the will to want to do it.

“Unless politics is offering them something that they think is worth getting out of bed for and going to vote for then they’re not going to do that, and clearly politics is not doing that and we’ve got to change that.” 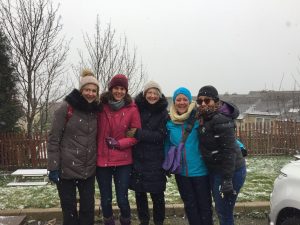 Eleanor Barton was the first woman to be elected to Sheffield City Council in 1919 and by 1920, only 3% of Sheffield councillors were women.

The Sheffield branch of the Women’s Equality Party are hoping that success in Walkley will help them improve female representation on council committees.

Only 33% of councillors are female despite women making up 51% of the population, according to the party.

A Women’s Equality Party spokesperson said: “At a time when fresh thinking is needed to confront issues like violence against women and girls, economic inequality, and the undervaluing of care, women and men in Sheffield would benefit hugely from having a voice on the council who puts equality at the heart of every decision.”

The vote will be held on Thursday 3 May where one third of the council seats will be up for election.

We asked women in Sheffield about their views on voting.