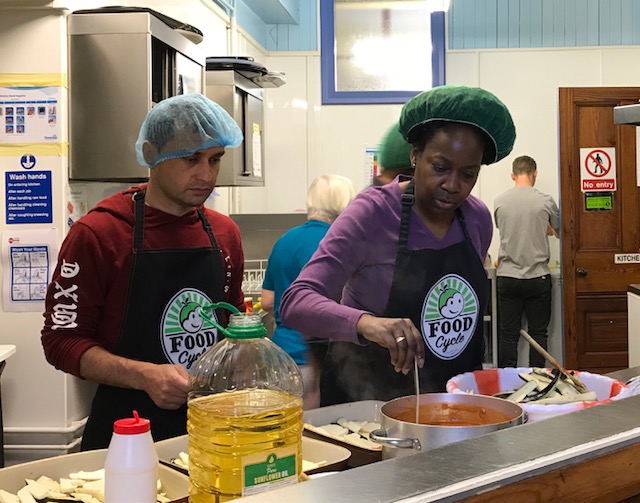 A Sheffield charity dedicated to eradicating social isolation is using food wastage to cook meals in their efforts to bring people together.

Growing organisation, ‘FoodCycle’, currently run four projects across Sheffield, with plans to open an additional location in Gleadless Valley due to overwhelming success and support.

With the help of local volunteers, ‘FoodCycle’, use donated food to cook meals for members of the community, that often go without social interaction.

Madeline, Volunteer of FoodCycle Sharrow, said: “We get the majority of our food from the Moor Market, they regularly donate when they have too much stock. We also get donations from Tesco, Sainsburys and M&S.

“We wish that food waste wasn’t a problem and there wasn’t a need for projects like this, however it’s a nice place to help people feel involved and it’s better to use unwanted food than let it go in the bin.”

Efforts to combat food waste are also being made by Sheffield students. Volunteer group, ‘Save our Sandwiches’, work on a daily basis, collecting food waste from outlets across The University of Sheffield, which is then distributed to homeless shelters across the city.

Volunteers of ‘Save Our Sandwiches’, held a march on Saturday 5th May in the city centre to raise awareness of the issue of homelessness and food waste around Sheffield.

Hannah Rees, Secretary of ‘Save Our Sandwiches’, said: “SOS’s march highlighted how the usage of food waste can help in showing support for homelessness. In the foodhall part of our event, some of the catering provided was packaged sandwiches which were perfectly good to eat but would have otherwise been thrown away.

“When you consider how much money is wasted through ordering food which just goes in the bin, and the increased carbon footprint as a direct result of this, the negative impacts of wasting food is something that we should work together on and take responsibility for.”