Ice cream wars have broken out after parents claimed a van parked outside Birley Primary School is breaching his licence by selling cones outside the agreed time.

Paul Grayson, who has been an ice cream man for 28 years, has applied for his licence to be renewed to sell lollies and cans of pop outside the school on Thornbridge Avenue.

But letters of protest from the public have been sent to the council licencing service asking for the licence to be revoked.

“This is due to the numerous complaints I have received over recent years, and continue to receive about the van adding considerably to the congestion at the end of the school day on what is already a very busy road.”

Mr Grayson has started a petition asking people to help him get his trading licence renewal.

So far more than 200 people have signed it to support him.

On ‘thepetitionsite.com’, Mr Grayson wrote: “I work seven days a week to take care of what we have built up and now I do the school at Birley.

“I feel I have built a very good customer relations with the children and parents at the school, but last year, I got a few people that think they are going to get me moved off, I’m now thinking for their own gain.”

In a report to the councillors, licencing enforcement & technical officers said: “There were at least 20-30 people in the queue, some of which were children on their own, adults on their own and some adults with children.

“We observed people collecting children from the school that had illegally parked on double yellow lines within the vicinity of the school. Mr Grayson was parked legally and was not causing obstruction.”

The case will be heard by the Licencing Sub-Committee on Tuesday 15 May. 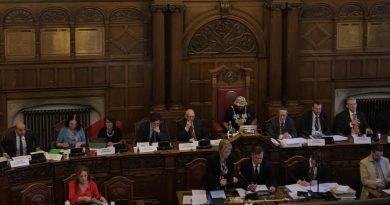