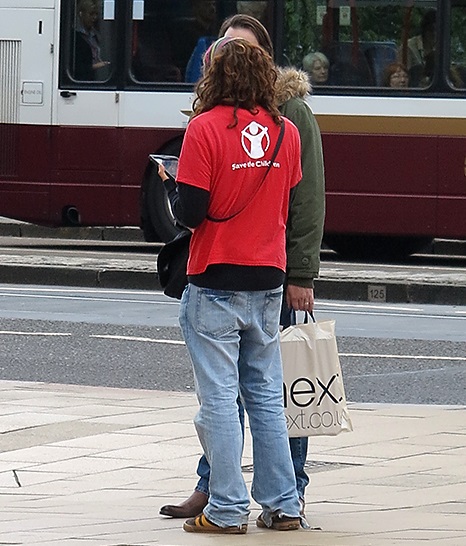 People have been venting their frustration over “chuggers” in Sheffield city centre.

Charity muggers, also known as “chuggers”, stop people on the street and ask for donations for their cause.

Recently, South Yorkshire Police held a public Q&A session on Facebook, where the increase in chuggers was a hot topic of conversation.

Inspector John Mallows said: “I share your frustration about the subject matter.

“The council is looking at the issue very closely and will be consulting the public in the very near future about issues such as the aforementioned which are directly impacting on the public when they are in the city centre.”

Michele Hatton, 38, Teaching Assistant, from Broomhill, said: “They will attempt to approach almost everyone with their affable characters that draw you into easy conversation. Once you engage they start their patter and it’s difficult to leave the situation.

“I’m a polite person so it’s hard to be able to choose to ignore them as you hope they mean well too, after all they’re supporting a charity, what could be bad.

“I feel it’s a huge problem in the city centre when people just want to go about their day without being bombarded, made to feel guilty or pressured into signing up for something they don’t want.

“Understandably charities need a way to find their sources of funding but praying on the general public in this pressurising manner gives out a negative view of that charity in my opinion. If I want to support a charity I will. In my own time and in my own way of my own accord.”

Sheffield City Council will announce further news and strategies to combat the problem on their website in the near future.