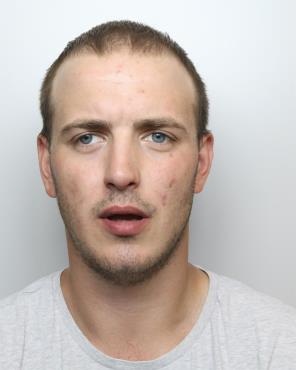 A 21-year-old man who was caught with a knife tucked down his trousers on Bank Holiday Monday has been jailed for possession of the blade.

Josh Kirby was a rear seat passenger in a car with four other men when officers were undertaking high visibility patrols in the Sothall area of Sheffield. They became aware of a strong smell of Cannabis coming from the car, which was parked on New Street at around 5pm.

All of the men were asked to get out of the vehicle and Kirby, of Ringwood Grove, was seen pulling the nine-inch blade from out of his trouser leg, and attempting to hide it under the seat in front.

He was arrested at the scene for possession of a bladed article and taken into custody.

Kirby admitted in an interview that he had been picked up to go and smoke cannabis in the car, but denied that the knife was his.

He was subsequently charged with possession of a bladed article and appeared at Sheffield Magistrates’ Court on Wednesday, where he entered a guilty plea and was sentenced to six months in prison.

DC Ryan Griffiths, investigating, said: “There is no legitimate reason why anyone would have a nine inch knife and be sat in the back of a car, smoking illegal drugs on a weekday afternoon.

“Kirby just had the knife in his possession, and he’s now behind bars. Possessing a bladed article is a crime and people will be arrested if they believe they are above the law and make the decision to carry a weapon.

“You are more susceptible to actually becoming a victim of knife crime if you carry a knife, and you are also more likely to use the weapon in criminality if you carry one.

“I hope Kirby does think while he’s in prison and considers his actions, as there are much better ways to spend a bank holiday Monday than possessing a lethal and dangerous weapon.

“I also hope his arrest sends a very clear message that we are committed to protect our communities and our city from those who choose to be involved in any form of criminality.”