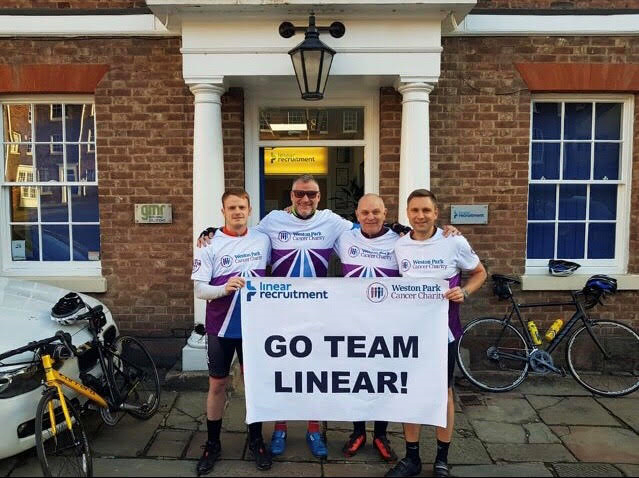 Linear Recruitment completed an 83.6-mile bike ride and raised over £2500 for the Weston Park Cancer Charity.

On 12 May a team of four Linear Recruitment colleagues completed the “gruelling journey” from Sheffield to Cleethorpes, covering over 80 miles to raise funds for Weston Park Cancer Charity. Their JustGiving page has had 130 supporters and has currently raised £2563, smashing their initial £2000 target.

One of the team members and financial director for Linear Recruitment, Gareth Tomkins, 38, said: “It’s amazing, we really didn’t expect to raise this much, it really did exceed our expectations”.

With the help of fundraising like this, the Weston Park Hospital Cancer Charity has raised over £22m since beginning in 1994 and aims to create a better life for those living with cancer. It is the region’s only specialist cancer hospital, and provides care for thousands of patients across South Yorkshire, North Derbyshire and North Nottinghamshire.

At Linear Recruitment cancer is a word they have heard all too often, with many of those on the team knowing its effects first-hand.

Gareth Tomkins, said: “We were inspired basically because of family members that have been affected by cancer, such as myself and Dan Plumb who have had close family members treated at Weston Park Hospital, that’s really what inspired it”.

The money raised is used to fund things that Weston Park says the NHS is unable to, and by doing so going the extra mile for people with cancer. They fund projects that directly impact cancer patients and help them and their families to live fulfilling lives following being diagnosed.

The bike ride was a big success, and after weeks of training the “(UN)Olympic Linear Cycling Team” managed to complete the journey in less than 5 hours after initially expecting it would take 7.

“It went better than expected, we all stuck together,” said Gareth Tomkins.

To donate to Linear’s JustGiving page go to: https://www.justgiving.com/fundraising/linearwestonparkbikeride