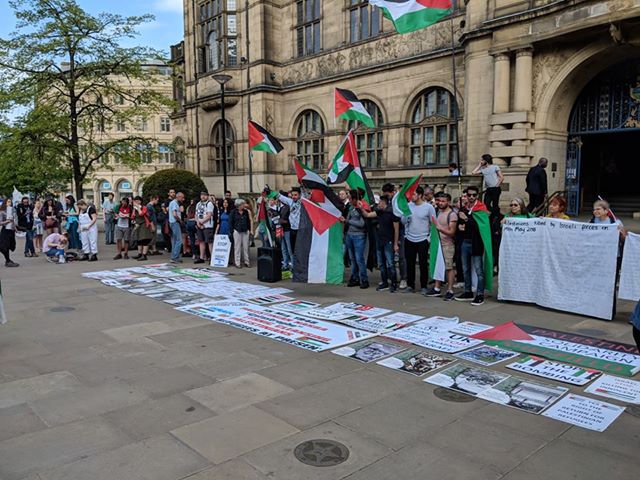 Hundreds of people gathered outside the Town Hall yesterday afternoon to protest the “disgusting” killing of 58 Palestinians in Gaza on Monday.

“We came here to express solidarity not only for the victims of yesterday, but for all victims of Israeli crimes,” he added.

The Palestine Solidarity Campaign hold weekly protests every Saturday although an emergency protest was called following the atrocities on Monday which saw the killing of 58 Palestinians.

The protest began tensely as passers by clashed with organisers about their views on Donald Trump’s foreign policy.

Colette Wymer, 36, of the Socialist Workers Party said: “We are supporting the emergency protest after the atrocities in Gaza. We are absolutely disgusted by what happened a day before the anniversary of Nakba.”

Yesterday marked the anniversary of Nakba which was the mass exodus of 700,000 Palestinian Arabs who were expelled by their homes.

Mrs Wymer said: “The way Trump has acted with the moving of the US embassy to Jerusalem is disgusting.

“To not challenge what is going on and to ignore it would be wrong. We need the government to understand we are not happy, it is disgraceful to play politics while children are being murdered,” she added.

A joint campaign between several groups including the Palestine Solidarity Campaign, the Sheffield Palestine Women’s Scholarship Fund and Sheffield Hallam Palestine Society is being developed against HSBC.

One spokeswoman for the campaign said: “They are the most complicit in loaning and investing in arms companies which result in the killing of children.”

HSBC have recently agreed a £90m plan to move their headquarters into Sheffield City Centre.

Yesterday’s protesters hope the campaign against HSBC will eventually result in people closing their accounts and boycotting the bank.

The protest was widely viewed by members of the public passing by and was carried out in a peaceful manner.