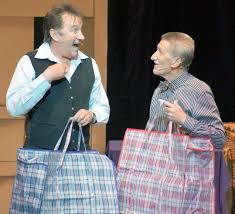 Rotherham council are set to decide whether an area of the town centre should be renamed in memory of Barry Chuckle.

The council board will meet on Wednesday to consider a petition calling for the unnamed area outside Boots on Effingham Street to be renamed Chuckle Square.

The petition was started by the Rotherham Advertiser, and currently has 1,588 signatures. Editor Andrew Mosley said in the petition summary that “now is the time to honour their contribution to entertaining Rotherham and the whole country for many decades.”

Barry Chuckle, whose real name is Barry Elliott, was one half of the Chuckle Brothers duo. The pair are most famous for ChuckleVision, which aired between 1987 and 2009.

The brothers were from Rotherham, and named honorary vice presidents of Rotherham United FCin 2007.

The comedian died aged 73 in August of last year, following a short battle with cancer.