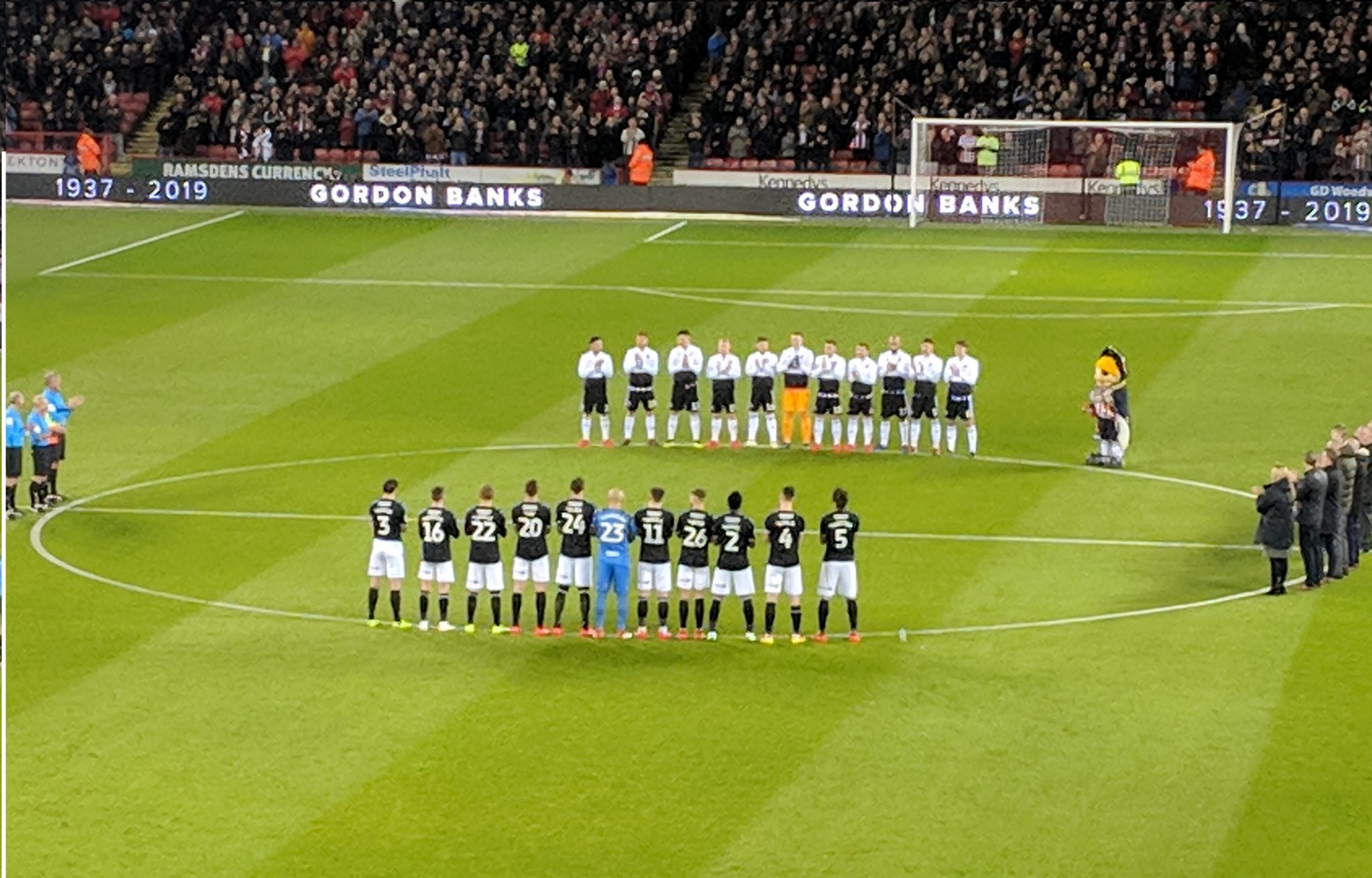 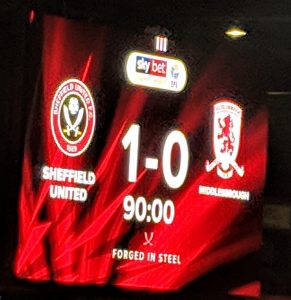 The Blades will be pleased to have bounced back with an important reaction from last week’s game when they blew a 0-3 lead at Aston Villa to draw 3-3 in the last minute.

There was a sombre atmosphere before kick off as a minute’s applause was observed to honour the late Gordon Banks, the Sheffield born 1966 World Cup winning goalkeeper. The whole stadium stood united in respect to commemorate a true legend of the game, who sadly passed away on Tuesday. 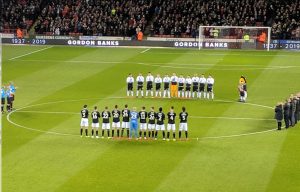 A minute’s applause to honour the late Gordon Banks

The game started slowly, with no significant opportunities in the first ten minutes bar a superb 25 yard effort from United’s Mark Duffy, which forced keeper Darren Randolph into making a great save.

The second notable chance of the game came in the 18th minute through the in-form Billy Sharp, as he controlled Enda Stevens’ cross with his back to goal, but blasted it high over the bar on the turn.

Middlesbrough’s Aden Flint was a forced substitute in the 33rd minute, his injury paving the way for Stewart Downing’s return, the veteran midfielder making his first appearance in five games. This change brought a tactical switch up for Middlesbrough, with their lack of defenders on the bench meaning they had to revert to a 4-5-1 formation.

The half ended on a quiet note with The Blades’ struggling to match the physicality of their opponents, but with neither side creating many major chances.

The second half started more lively, with the Blades’ denied a penalty claim in the 49th minute which had the home ground baying for blood.

United were growing into the game more and more as time went on, and starting to pass the ball with more conviction as they probed for the opening goal.

The stadium erupted ten minutes later as Billy Sharp had the ball in the net from substitute Gary Madine’s cross-come-shot, only for the goal to be disallowed for offside.

Boro’s relief was short lived however, as substitute Richard Stearman headed a curling Oliver Norwood free-kick superbly into the top corner in the 61st minute to make it 1-0 to the Blades.

The visitor’s dismay was added to three minutes later, as Daniel Ayala’s late challenge on Kieran Dowell resulted in his second booking in seven minutes and consequential red card. In addition to Flint’s earlier injury, this left Middlesbrough to see out the remaining half hour with 10 men, and with no natural centre backs on the pitch.

The sending off brought another tactical switch, with striker Britt Assombalonga replacing midfielder George Saville as they desperately searched for an equaliser.

The change almost paid off when the leveller nearly came through Assombalonga when he was denied by a strong Dean Henderson save in a one-on-one chance in the 74th minute.

Boro pushed on for an equaliser but ultimately the rest of the game lacked in chances as the Blades’ controlled their 10 men counterparts with relative ease, seeing out the fixture with limited opportunities coming from either side.

Middlesbrough manager Tony Pulis did not hold back with post match words, suggesting that they were hard done by by the referee.

He said: “For their goal, it was a free kick. It’s beyond belief that that goal stands.”

He questioned the decision to appoint a referee with limited experience of the division in such an important game. “I’m disappointed. That was the referee’s 8th game. I don’t blame him but the teams at the top get premier league referees to ref their games. To give someone who has only refereed 8 games this game is silly, difficult to understand.”

United gaffer Chris Wilder was understandably more upbeat in his outlook: “It was a great response after Friday, to play that well in front of 35,000 at Villa and not to win the game you’re scratching your head, so we had to produce a big performance against a very physical and direct side in Middlesbrough. I didn’t think we did that first half.

“The second half we came out roaring, we were a little bit more aggressive and more positive in our play. It was always going to be a tight game, but I think a fair assessment would be that we shaded the second half. The big thing for me tonight is the recovery from what happened on Friday night.”

The victory was an extremely important one with second place Norwich City’s 3-1 loss at Preston, and fourth placed West Bromwich Albion’s failure to defeat Nottingham Forest last night allowing them to edge closer to the Premier league, as the race becomes ever tighter at the top of the division.

The Blades’ return to Bramall Lane on Saturday as they prepare take on relegation strugglers Reading.