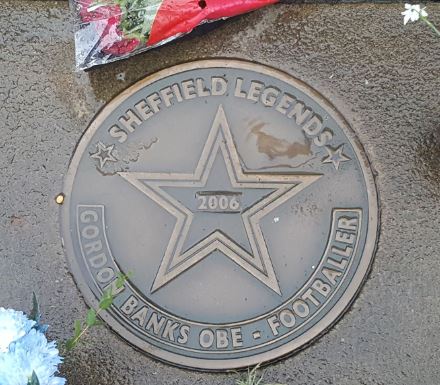 England goalkeeping legend Gordon Banks is set to have a permanent memorial erected in his honor, Sheffield City Council has announced.

Banks has already been given Sheffield Legend stature after having the first ever star in the city’s Walk of Fame named after him, however, the council is now in talks with the FA to create a permanent tribute in his memory.

Banks was born in Abbeydale in 1937 and brought up in Tinsley. Although Sheffield is his home city, Banks played most of his club games for Leicester and Stoke City.

However, he is best known for playing every game in the 1966 World Cup, including the victory over West Germany in the Final. He remains to this day the only English goalkeeper to have won the tournament.

He kept his place in the starting eleven coming into the 1970 World Cup, where he pulled off one of the greatest ever saves against Pele.

“Sheffield being the home of football and having Gordon Banks as one of it’s sons is absolutely, really important to Sheffield.”

She added: “When we put forward a bid to be a host city for the World Cup a few years back, Gordon came up and really put a lot of work in to promote Sheffield for that. He was a real friend to Sheffield at that time and we should really thank him for that.

“Particularly as he was brought up in Tinsley, people down there really want to see something happening to pay tribute to Gordon Banks and how brilliant he was for football, for England, and also for Sheffield.

Cllr Lea says the Council are in discussions with the FA over funding for a memorial, but she is confident this will be secured.

She said: “There’s all sorts of ideas, there is the famous save he made, it might be some kind of image of that, I’m not sure what, but as I said, we have to find the funding.

“I know other football players across the country see him as a hero for the game and want to help in any way they possibly could.”