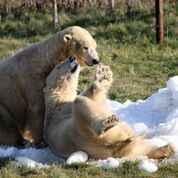 It was a brr-lliant day for polar bears as 5 tonnes of ice was donated from The Ice Co, the nation’s biggest producer of ice.

YWP’s Carnivore Team Leader Kim Wilkins said: “Our polar bears absolutely loved playing around in the ice. They were in their element. It was a real Half Term treat.

“It’s such an amazing idea and great for our animals to be able to play with the ice now the snow days seem to be over.

“Polar bears do not need ice and snow all year round. In the wild during the artic summer they may spend five to six months in an ice free environment.” 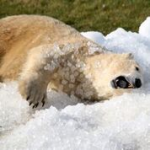 The Ice Co learnt that animals adore playing with the different textures so donated ice to the park, at Branton, near Doncaster.

The company, based at South Kirkby, delivered the ice to the park which is 20 miles from their base.

A spokesperson for The Ice Co. said “We sometimes have additional ice so we were please when a member of our team suggested the idea and was a partnership we couldn’t resist.

“We’ve loved seeing the reaction from the Polar Bears. A fantastic idea and something we’ll hope to do again!”

DID YOU KNOW Polar bears in the wild may spend 5 months on ice free land during the artic summer!? However, we didn’t want to spoil their fun!