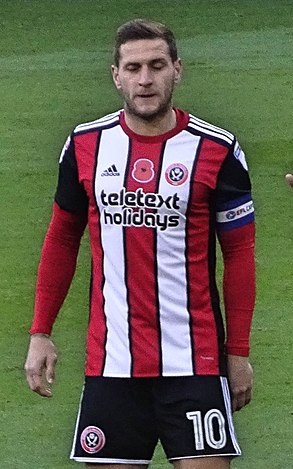 Sheffield United has confirmed that captain and top goalscorer Billy Sharp has signed a new contract at the club.

It is a two-and-a-half-year deal and gives the Blades a big boost in their race for promotion to the Premier League.

Blades boss Chris Wilder said: “”Billy is a natural goalscorer for us, we are delighted we have negotiated so that he can extend his period with the club. I would imagine he is looking forward to more successful times, he looks after himself and has that drive and desire to keep pushing on. The group has evolved and improved in my time here and he has done likewise.”

He added: “It is also another sign that we are committed to rewarding impressive performances, we want to keep our best players and I’m delighted that they will be with us for a longer period.”

The 33-year-old striker has scored 22 league goals so far this season and is seen as a pivotal player at his boyhood club.

Sharp recently became the leading English-born goalscorer in 21st century English football, after scoring his 220th career goal in a 3-0 win against Wigan on January 1st.

Fantastic news! Not just a great goalscorer but a leader in the dressing room. Incredibly passionate about the club and he has done more than enough to warrant a new contract.

He re-joined United for the second time in his career after transferring from Leeds for an undisclosed fee believed to be in the region of £500,000.

The club also confirmed that left-back Enda Stevens has signed a new deal which will keep him at Bramall Lane until 2022.

The Blades currently find themselves in 2nd place in the Championship and are one of the favourites tipped for promotion. However, they face a crucial away game against 4th placed West Bromwich on Saturday.