Sheffielders warned they could be unwittingly fuelling climate change 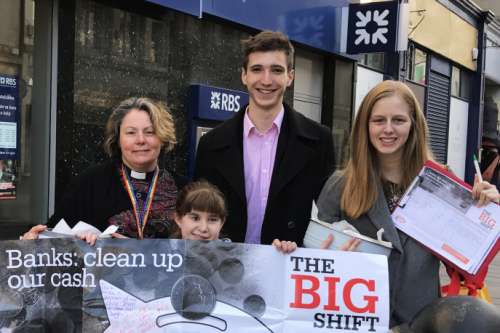 A charity in Sheffield has backed a move to stop big businesses funding the fossil fuel industry.

Many people in the city may be unaware that their bank accounts, donations to charity and even money paid out in government subsidies might be helping to fuel climate change.

Christian Aid campaigner, Sarah Rowe, 32, said: “We’re an organisation working to end poverty globally and we don’t believe you can end that without stopping climate change. The Big Shift particularly focuses on the way the fossil fuel industry is resourced.”

The Yorkshire branch of Christian Aid has joined in the Big Shift campaign to build a cleaner and safer world by trading fossil fuels for renewable energy instead.

Since the start of the campaign in 2015, great strides have been taken towards climate change. The UK government has agreed to phase-out coal power and over 5,500 churches have since switched to clean energy.

In addition, some banks including the Royal Bank of Scotland (RBS) and Standard Chartered have ruled out funding for new coal.

However, some of the biggest banks in the UK are still heavily investing in fossil fuel projects.

Europe’s biggest bank HSBC is still willing to fund new coal projects in Bangladesh, Vietnam and Indonesia, three countries that are extremely vulnerable to the impacts of climate change.

According to research by Christian Aid, in these countries, people have been displaced from their homes and even killed in the process. Experts predict that there will only be more drought, floods and landslides to come; meaning more conflict, hunger and insecurity for those living in poverty.

For a cleaner future to be possible, the organisation believes that society needs to stop being too reliant on fossil fuels and work on steadily transitioning to a low-carbon economy.

To aid the campaign, locals can get involved by emailing John Flint, the CEO of HSBC to urge them to stop financing the fossil fuel industry or simply take part in an action outside Yorkshire’s HSBC branch.

Sarah added: “People can also reduce their carbon footprint and encourage their communities to do the same. It’s really important that people take political collective action alongside individual action in their own lives.”