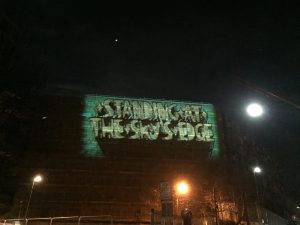 The play about the iconic council estate had its name in lights for less than two hours on Wednesday night, with few catching a glimpse.

The sold-out musical, being shown at the city centre’s Crucible Theatre, gave residents an offer of first preview and exclusive tickets.

The Sheffield artist was commissioned by Urban Splash, the company behind the regeneration of Park Hill. Although met with some controversy initially, the development proved to preserve the estate’s community spirit.

Cory Stewart, a resident of the Park Hill regeneration said: