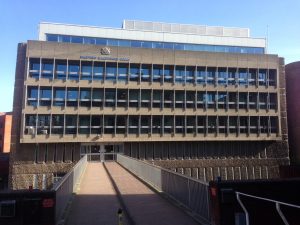 A woman has been charged after drunkenly hitting her ex sister-in-law in the face with a glass bottle.

Annmarie O’Neill, 39, of South Avenue, Swinton, near Rotherham, was celebrating getting a new job when she hit Claire Whittaker in a bar she described as like “her living room” on October 14th last year, said prosecutor Alison Goldsmith QC.

Ms Whittaker said in a statement: “She knows I’m vulnerable because of my past. She scares the living daylights out of me.”

Gwynne Norries, QC, defending O’Neill, said that the circumstances are “rather sad”.

“Miss Whittaker has two children with O’Neill’s brother and, after their separation, has not allowed any contact between them, causing distress to O’Neill who was previously very close to them”, Mr Norries told the court.

In an effort to avoid each other, there was an “unwritten rule” that Miss Whittaker would not occupy the bar she was at when the incident took place, Mr Norries said.

O’Neill had been offered a job at KFC and had “more to drink than was good for her” while celebrating and admits that she does not fully recall the incident that was “entirely out of character”, Mr Norries added.

District Judge French told the court O’Neill showed remorse and regret for her actions but if the glass bottle smashed it could have caused major cuts to Miss Whittaker.

He sentenced her to a six-week jail sentence, suspended for six months, for assault by beating.