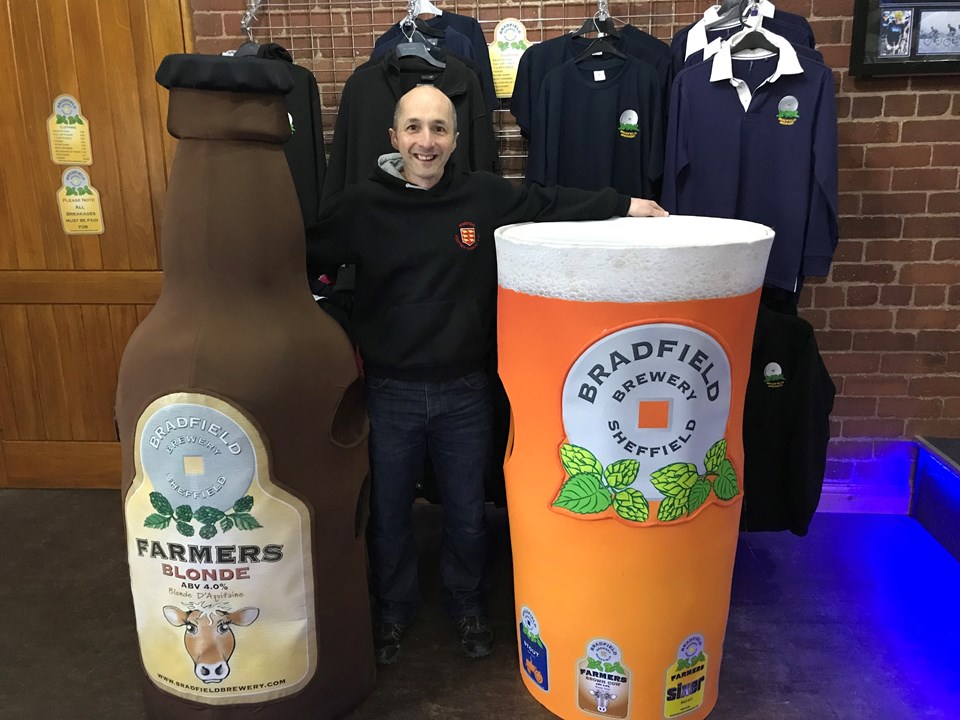 A Sheffield resident is set to run the London Marathon dressed as a pint of beer and hopes to smash a world record.

Peter Knight, from Penistone, has run marathons in past years and has previously geared up as a bottle of Farmers Blonde, raising over £5,000 for a range of charities.

This year, Peter has designed a new pint-sized, costume in an attempt to beat the Guinness World Record as the fastest glass to run a marathon.

Mr Knight said: “We are going for it in a new costume. With the amazing support of Bradfield Brewery we are attempting to beat the world record.

“I will be raising money for Myaware. This is a relatively new charity to me, but I became aware of the work the charity does after finding that a friends partner is affected by myasthenia.”

Commissioned by Bradfield Brewery, the glass resembles a pint of beer and features the Brewery’s branding. Having previously ran for the in our Blonde Bottle and Belgian Blue bottle costumes, Bradfield Brewery welcomed Peter’s idea to create a new costume for this world record attempt.

John Gill, Brewery Director, is looking forward to seeing the new outfit in action and has high hopes for Peter.

He said: “When Peter first approached us with the idea of attempting the fastest glass record we thought ‘is this guy crazy?’

“However we soon realised he wasn’t crazy at all just simply ambitious and passionate about running and wanted a new challenge. We are excited for Peter’s Guinness world record breaking attempt and can’t wait to cheer him on.”

The costume was inspired by Peters’ favourite tipple, following 20 years of long-distance running in support of charities.

Mr Knight said: “I have been contemplating a world record for quite some time and at the beginning of this year I decided that 2019 was the year to do it! Running is passion of mine and to be able to create a challenge revolving around something I enjoy doing, as well as supporting a great charity is a fantastic opportunity for me and I will be giving it my all to try and achieve the world record!”

“The target to beat is 4 hours.  We’ve been working hard with costume makers Frenzy Creative to try and get the costume as lightweight and streamlined as possible without compromising the strict rules stipulated by the GWR team,” he added.

The costume will be given a test-run at the Sheffield Half Marathon on April 14, in preparation for the London Marathon on Sunday 28 April.

Details of Peters’ fundraising can be found here: https://www.justgiving.com/fundraising/fastglass