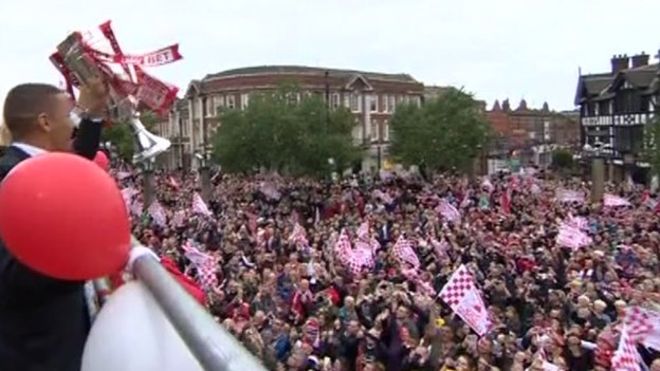 Sheffield United will celebrate their promotion back to the Premier League with an open-top bus parade through the city centre on Tuesday, plus a civic reception at the Town Hall.

The Blades sealed automatic promotion last weekend following their 2-0 victory against Ipswich and could potentially lift the Championship title if results go their way this weekend.

Celebrations are set to continue next week, with thousands set to line the streets in order to celebrate United’s long-awaited return to the Premier League after a 12-year-absence.

The team will then head to Sheffield Town Hall for around 6.30pm where there will be a civic reception and drinks before greeting crowds outside at around 7pm.

The Blades could potentially be celebrating lifting the Championship title as if Norwich slip up against Aston Villa on Sunday and United beat Stoke they could win the trophy on goal difference.

United’s final game with Stoke will also be shown live at Bramall Lane, with tickets on sale priced at £10 for adults and £5 for concessions.

There was controversy this week after United fans started a fundraiser to fly a banner mocking Sheffield Wednesday over Hillsborough during their game against QPR on Sunday.

A Go Fund Me page was set up to raise £780 to fly the banner over Hillsborough. £810 was raised, with the extra money being donated to the Children’s Hospital.

Wednesday fans have responded by starting their own fundraiser, raising over £5,000 for St Luke’s Hospice.