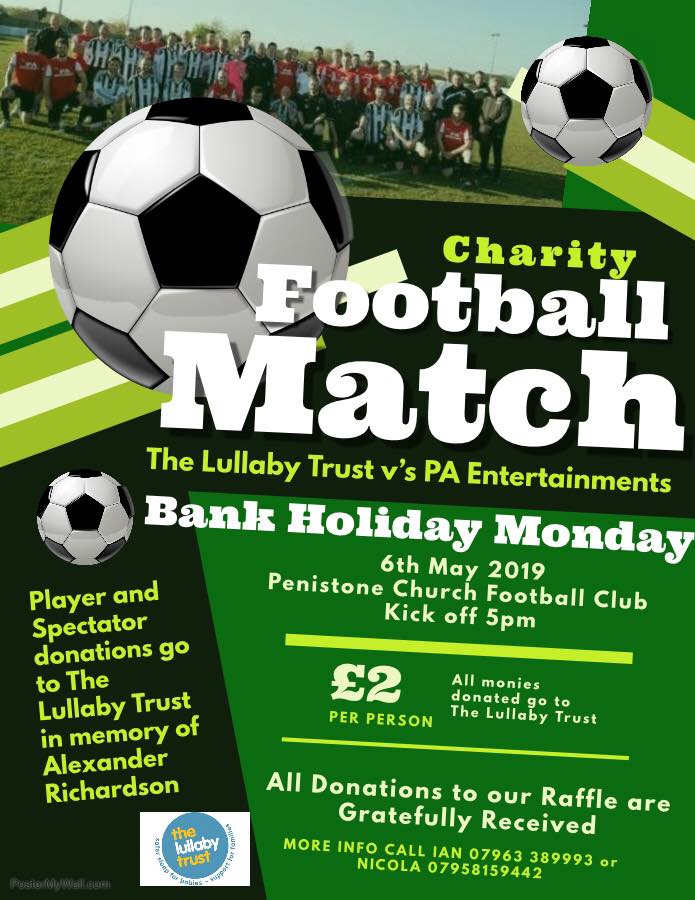 A charity football match will take place at Penistone Church Football Club on bank holiday Monday in order to raise money for The Lullaby trust in memory of a couple’s son who tragically passed away.

Organised by Ian and Nicola Richardson, the annual game is in memory of their son Alexander who sadly passed away from sudden infant death syndrome (SIDS) 12 years ago.

Played between the Lullaby Trust and PA Entertainment, the match is raising money for The Lullaby Trust, a charity that raises awareness for sudden infant death syndrome.

Organiser Ian Richardson said: “We’d done other events such as charity balls and for ages I’d been saying we need to get a football match on. Three years ago we finally got round to doing it.

It started out as a bit of kickabout for charity but last year it become a bit more serious – while it is a charity game, once you get 11 blokes in a rectangle with a couple of goal posts it becomes very serious!

“Out of all the people who come out to support the football match and the other charity events we do, the vast majority sadly never even met Alexander before he passed away.

“For them to come out and support a charity is quite humbling for me, my wife and our other children so it means an awful lot.”

Last year’s game was a tightly-contested affair, with Lullaby Trust taking the trophy with a 1-0 victory over PA Entertainment.

Tickets are priced at £2 per person and a raffle will also take place with all money raised going directly to the Lullaby trust.

The match kicks off at 5pm on Monday 6th May and will be played at Penistone Football Club in Barnsley.

More information about the Lullaby Trust can be found at www.lullabytrust.org.uk.