Members of a Sheffield community have denounced crime in the face of violence on Sheffield’s streets with a walk for peace.

Community groups in Nether Edge and Sharrow organised the walk for peace in reaction to a spate of attacks in Sheffield, including the shooting outside the home of then councillor Mohammad Maroof.

Saturday’s walk was supported by several groups in Sharrow including Mums United Sheffield. Its director, Sahiar Irshad, said: “I’m exhausted, this behaviour’s becoming so prevalent, the streets don’t belong to them, they belong to us. They belong to all of us.”

Ms Irshad said that the aim of the walk was to highlight the community’s unity against the crime.

She thought the walk was a success and hopes to do it annually.

Ms Irshad said: “There was a good turnout. The more we come together and the more we act as a positive force the bigger our impact”.

Director of the One Nation Community Gym, Wajid Nazir, 49, although welcoming everyone who attended, said that the organisers of the walk wanted support from a wide variety of people in tackling the issue.

Mr Nazir said: “People need to get more involved, we should leave politics out of this and all work together to find a solution to this.”

“You can imagine how haggard we’ve been in Nether Edge and Sharrow. A lot of people are really unwilling to speak out and give evidence for fear of some kind of revenge and they’re frightened.”

As well as Councillor Alison Teal, Labour councillor Jim Steinke attended the walk for peace. During March’s meeting of the Council’s Safer and Stronger Communities Committee Councillor Steinke promised that a new strategy would be considered to tackle the violent crime in his presentation.

Councillor Steinke’s presentation also highlighted that’s Sheffield’s crime rates were significantly lower than the median for cities in the UK. 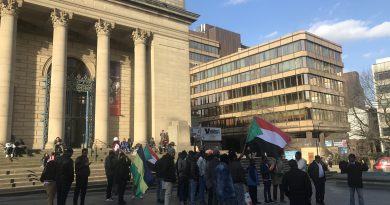 Sheffield locals stand together one year after Orgreave inquiries were halted