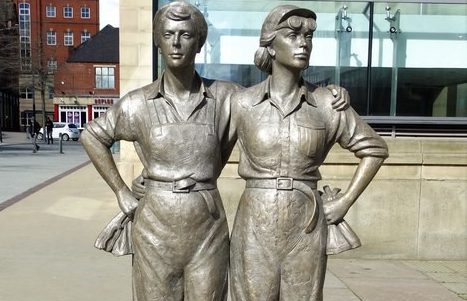 Trade Unions speaking at the University of Sheffield claim women are still not treated with respect in the workplace.

While the rights of women have improved in the last 30 years, there is still a long way to go for women to be taken seriously at work, according to Union worker Maureen Howard.

The University of Sheffield are in the middle of their Workers Rights Week in celebration of International Workers Day, with many trade unions such as Unite and the University and College Union (UCU) being present.

Maureen Howard, Unison’s Assistant Branch Secretary and Vice Chair of Staffside, 56, said: “If a man is strong and powerful he is celebrated. If a woman acts this way she is called controlling and bitchy. What is admired in a man is negative in a woman.”

According to Mrs Howard, men still dominate in the workplace and hold the power.

Mrs Howard said: “Workplaces are still very patriarchal. You will find that those in higher management positions are men and I think the fact that women take time off to have children contributes to this as it takes them longer to progress.”

According to recent statistics from the Young Woman’s Trust, one in five woman said they are paid less than their male colleagues for similar employment roles. Alongside this, a quarter of females aged between 16 and 30 have been sexually harassed at work with only 8 percent actually having reported it.

One 41 year old teacher from Sheffield said: “I’m a line manager of a department and all the men I manage are on higher salaries. I’ve also been paid less than men for doing the same job.”

Workers Rights Week has highlighted the importance of Trade Unions and the work they do for trying to help women gain more rights.

Mrs Howard said: “Trade Unions are great as they raise awareness and speak up for people who don’t dare to speak up. They are absolutely vital.”